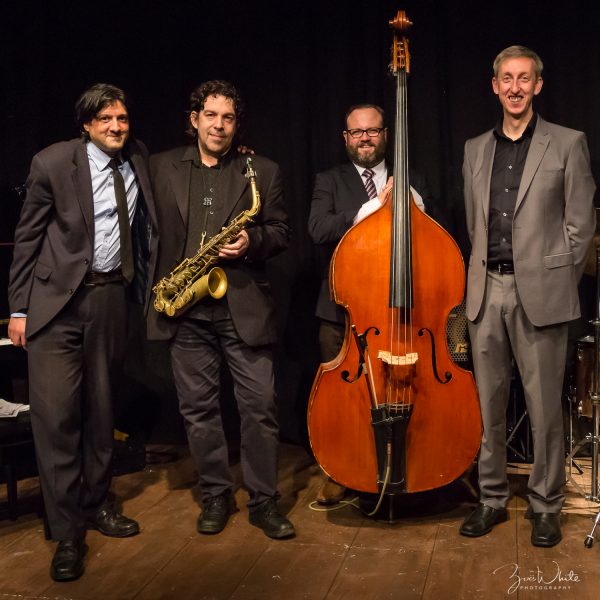 An object, gleaming with splendour and so new that remnants of its protective sheathing remained attached to the lid, stood to the left of the Progress Theatre stage;  an upright piano. A mere glimpse at its resplendent beauty was enough to set pulses racing with anticipation as the audience filed into the auditorium. Portable keyboards have their place I’m sure, but as they say, ‘There’s nothing like the real thing.’ And this instrument looked to be in a class of its own.

And yet, appearances can be deceptive. How many pianists in the rich tapestry of  jazz have received this response to their complaints about a duff instrument,  ‘What d’you mean there’s something wrong with the piano. I had it painted only last week!’ One recalls the apocryphal tale of the player who cautioned the interval pianist not to use the middle keys of the keyboard. ‘They don’t work,’ he declared. Way back in 1965, Steinway’s of London  immediately manned the barricades when word began to circulate that Ronnie Scott was in need of an instrument for that notorious ‘ivory basher’ Bill Evans. In the event, pianist Alan Clare rescued the situation, and Evans’ debut at Ronnie’s, with the loan of his own baby-grand. And yet, the great man was still heard to remark, ‘My first time in London and I have to play a piano like that. S..t, man.’

I hope you will forgive this lengthy preamble. I simply want to make the point that all too often jazz pianists have been ill-served by promoters and recording managers, as if relegated to second-class citizenship, in a way that would never be tolerated in the world of classical music. World class musicians deserve the best and Leon Greening stands in the ranks of the greatest.

Aided and abetted by Christian Brewer on alto and soprano saxes, Dave Chamberlain on bass, who slotted seamlessly into the music as dep for an ailing Adam King, and whose jolly smile gave the impression that he was having the time-of-his-life, and the percussive pyrotechnics of Steve Brown, Leon set the evening alight as he launched into ‘That Old Devil Moon’. The piano, hired especially for the evening from Hickies venerable music shop in Friar Street, lived up to every ounce of its promise.

Leon simply gathers you up in the energy and momentum of his playing and sweeps you up along with his endlessly inventive improvisations. And yet for all his speed of execution, each note is placed with exact precision, struck with the clarity of pure crystal and weighted with deep emotion. He is a consummate master of his art, using both hands to build cliff-hanging tension. Like a Formula 1 driver he anticipates the road ahead and knows exactly when to change gear and when to hit or ease off on the accelerator. Combining rhythmic subtlety with a fiercesome directness of approach, Leon’s playing is spellbindingly awesome.

The choice of tunes for the evening bore the spirit of Art Blakey and the canon of great musicians who passed through the ranks of the Jazz Messengers, whose compositions have become standards within the jazz repertoire. ‘Ugetsu (Fantasy in D)’ and ‘Martha’s Prize’, reflected the bluesy elegance of Cedar Walton. Freddie Hubbard’s ‘One of Another Kind’, one of two outings for Greening with just bass and drums, had the knife-edge quality that so distinguished the trumpeter’s playing, while  Wayne Shorter’s spacious ‘The Summit’, took the tune to the outer limits of improvisation. As Freddie Hubbard once remarked, ‘We all kind of grew up together with Art Blakey because we all were young and he gave us a chance to write. We had to write something that was good.’

Steve Brown is also a ‘keeper of the flame’ for Art Blakey. Though less bombastic than Art, he pushes the band along with a driving swing, using perfectly placed accents and the full armoury of his kit and formidable technique to enrich the ensemble sound and to support the soloists. He understands the value of quiet and even silence. His work with brushes is impeccable and he uses his hands to draw earthy rhythms from the depths of his tom toms. Like Blakey he employs a distinctive press roll on his snare drum as a musical punctuation mark, as if to say, ‘Your time’s up mate. We’re on to the next solo now!’

He soloed to thrilling effect on ‘Time After Time’, the classic standard from Sammy Cahn and Jule Styne, working through a series of variations that grew in complexity and intensity. Once complete he neatly delivered the tune back to the front line.

The light, airy alto saxophone of Christian Brewer contrasted beautifully with the huge resonance of Greening’s piano, none more so than on Billy Strayhorn’s ‘Chelsea Bridge’, an impressionistic piece deeply associated with the breathy tenor of Ben Webster.  Dave Chamberlain sustained the haunting atmosphere with a gorgeous bowed bass solo. ‘Dawn Bird’, took flight as another feature for Brewer, his soprano sax floating over an irresistible Latin beat laid down by the rhythm section.

‘Saudade’, an achingly beautiful boss nova by bassist Walter Booker, and ‘Not a Tear’, a second feature for the trio, and a dedication to Greening’s key influence Wynton Kelly, were further reminders of the fabulous gems to be extracted from mid-twentieth century modern jazz. Bobby Timmons’ ‘Dat Dere’, which along with his other great composition ‘Moanin’’, could be an anthem for those golden days, brought the evening to a soulful close.

‘I could have listened to that music all night,’ was one comment overheard at the end of the concert; a sentiment echoed I am sure by everyone in the sell-out audience. Four musicians playing at the top of their form; what more could one ask?  Leon Greening in a solo performance perhaps? Now that would be a treat for the ears!

As ever, thanks to the Progress Team for the warmth of their hospitality and the high quality of the sound and lighting, and Hickies Music Shop for the hire of a superb piano.