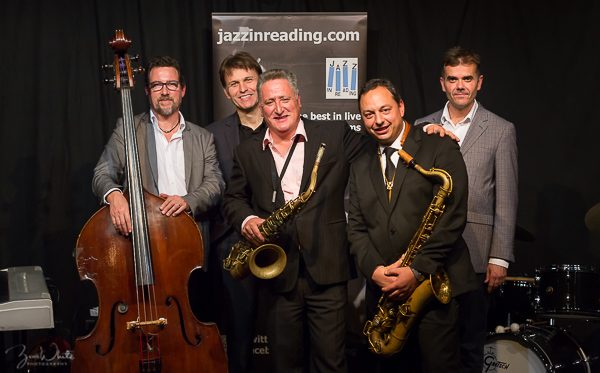 Gladiatorial contests between the giants of the tenor saxophone are the stuff of legend in the jazz world and form some of the most vivid images from the rich history of the music. Think of Coleman Hawkins and Ben Webster, Lester Young and Herschell Evans, Wardell Gray and Dexter Gordon, Sonny Stitt and Gene Ammons, Flip Phillips and Illinois Jacquet, Al Cohn and Zoot Sims, and Britain’s own Jazz Couriers, Tubby Hayes and Ronnie Scott.

After an interval of twenty years, Ray Gelato and Alex Garnett, two contemporary ‘heavyweights’ of the instrument, rekindled their partnership and locked into ‘battle’ on the stage of Reading’s Progress Theatre on Friday 27 October.

It was a case of lighting the touch paper and watching the sparks fly, and my, did they fly!

Gelato established the tone for the evening with a simple direction to Gunther Kurmayr, ‘Straight in’. The pianist duly obliged with a brisk paced introduction to Edgar Sampson’s 1933 classic ‘Blue Lou’. It set the band swinging and the front-line roaring, transporting us back in time to the heady days of the nineteen-forties, when small-band swing reigned supreme in an infinite number of basement clubs along New York’s 52nd Street. The experience of visiting the street as a young man left such an impression on Ronnie Scott that he vowed to open a club of his own one day. And the rest, as they say, is history.

The huge tones of Gelato and Garnett, unimpaired by amplification, were a joy to behold as they dug into ‘Topsy’. If I may use an analogy with boxing to compare these two masters of the saxophone, I would suggest that Gelato might deliver his knock-outs with a direct upper cut to the jaw, while Garnett would first set his opponent off balance, and then strike a glancing blow to the side of the head. Supported by Gunther Kurmayr’s elegant economy at the keyboard and the wonderful cohesion of Alvarez and Home in the rhythm section, the number immediately evoked the spirit of Count Basie’s first band and their recording of 1937; robust, irresistibly swinging and with an edge of menace that gives the tune its full flavour.

‘Robbin’s Nest’, a mid-1940s hit for Sir Charles Thompson, another self-acclaimed member of the jazz aristocracy, brought a relaxed change of tempo, but no let up in the strength of the beat. The theme bounced gently back and forth between Gelato and Garnett to great effect, before opening up for a string of melodic solos, again captured beautifully by the natural acoustic of the Progress auditorium.

Contrafact, as Alex Garnett explained, is the jazz musicians’ art of creating a fresh melody over a familiar harmonic structure; a process popular with players of the Bebop generation, though less so with composers of the time. Jerome Kern famously hated anyone ‘messing’ about with ‘All The Things You Are’, especially as he seriously lost out on royalty payments. Had he been alive, George Gershwin might have been similarly outraged by the numerous creative liberties taken with ‘I Got Rhythm’ and ‘Oh, Lady Be Good’. The latter became a vehicle for Thelonious Monk, in the form of ‘Hackensack’, which the ‘Tough Tenors’ delivered as a fiercely up-tempo swinger, complete with a wonderful round of snappy exchanges between the front-line players and Matt Home on drums.

Alex Garnett held the audience spellbound with his ballad feature ‘Chelsea Bridge. He captured the emotional depth and evocative beauty of Billy Strayhorn’s composition to absolute perfection, with sensitive support from his rhythm colleagues.

With the front-line back to full strength on the return of Ray Gelato to the stage, ‘The King’, another number from the Basie book, brought the first set to a scorching climax, prompting a rush to the bar for much needed refreshment.

A heavily disguised ‘Tea for Two’ opened the second set, before Ray Gelato took up the microphone and knocked the audience for six with the full force of his vocal chords on a rocking, earthy blues. Alex Garnett added to the fun with some lighter toned lyrics of his own invention.

‘Limehouse Blues’, a favourite with jazz players since the early 1920s, has the distinction of not really being a blues at all, though no one would have questioned its authenticity given the rip-roaring treatment delivered by the ‘Tough Tenors’. It was literally a matter of ‘all hands to the deck’!

If by now anyone doubted that Ray Gelato fully expressed his heart and soul though his playing, confirmation was provided by his ballad feature, ‘I Surrender Dear’, Bing Crosby’s first hit song. Majestic, is the word that immediately comes to mind to describe Ray’s playing, building, chorus upon chorus, in the manner of the great Coleman Hawkins. A show-stopping performance.

‘I wonder,’ Ray mused, ‘What Lester Young would have made of Donald Trump?’ Along with Coleman Hawkins, Lester ‘the President’ Young, was a giant of the tenor saxophone, though very different in style and temperament to the ‘Hawk’. A very private man, he closed off the discrimination and abuse that he suffered throughout his life and career, with the use of a personal language. ‘I feel a draught’, meant that he detected racial hostility. A later variant, ‘Von Hangman is here’, would be more in tune with Trump’s America.

Despite this background, Lester’s playing could be the coolest and most joyful experience one could ever wish for, as the Tough Tenors’ arrangement of ‘Tickle Toe’, a Young composition from 1938, fully testified.

In 1961, the 1920s styled band, The Temperance Seven, had a huge popular hit with a number entitled ‘You’re Driving Me Crazy’. Meanwhile, across the Atlantic, Tubby Hayes was making his ground-breaking visit to New York, an exchange arrangement according to the rules of the day which brought Zoot Sims as the first American guest to Ronnie Scott’s. Tubby played the Half Note jazz club to great acclaim and recorded with trumpet/flugelhorn star Clark Terry. In another example of contrafact, Terry used the chords of ‘You’re Driving Me Crazy’ to write a new melody dedicated to the ‘Little Giant’ from Britain – ‘A Pint of Bitter’. Taken at a nice medium tempo, the ‘Tough Tenors’ paid their own tribute to Tubby, arguably the UK’s greatest jazz musician.

Like Lester Young, Eddie ‘Lockjaw’ Davis had a long association with Count Basie, and the final number of the evening, ‘Hey Lock’, captured the vigour and no-holds-barred excitement of his playing to a tee, with the group in full shout, sounding more like a full-sized big band rather than a quintet. Matt Home cracked the whip from his drum stool; he could swing the band using his high-hat cymbals alone, while Manuel Alvarez held everything together with his gorgeous bass lines.

Of course, there was more to come. How could the band escape on such a night without an encore, this time a spontaneous blues that well-and-truly brought the house down.

What an evening! Great music laced with good-humoured anecdotes and repartee, all of which added up to musical entertainment of the highest order. Above all, it was a sincere tribute to the lasting influence of a generation of tenor players for whom ‘swing was the thing’.

As ever, special thanks to the Progress team for their warm welcome, hospitality and expertise in the sound and lighting department. It all added up to make what the ‘Tough Tenors’, Ray Gelato and Alex Garnett, described as ‘a great fun evening in a gem of a venue’.