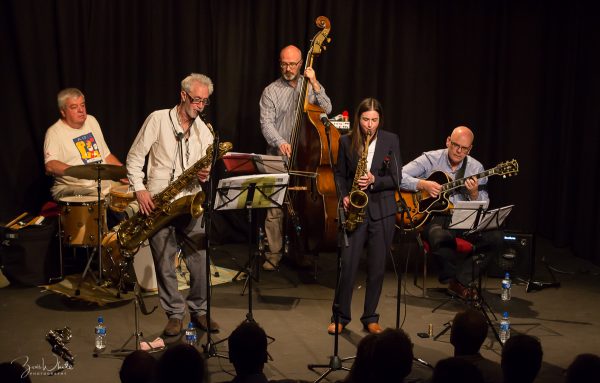 Some bands lift the roof of an auditorium with high octane displays of energy and excitement. Two of a Mind, fronted by Allison Neale and Chris Biscoe, take a more subtle and understated approach, with new arrangements by Allison, of numbers recorded by Gerry Mulligan in collaboration with Paul Desmond, on their classic albums, Blues in Time and Two of a Mind, plus several original compositions by Biscoe.

Two of a Mind speaks for itself, for this is a band with a fantastic level of understanding between its members, giving the music a lovely conversational quality, in the manner of the original albums. But no idle gossip or familiar platitude would find a place here, although a witty aside may surface every now and then, alongside a flight of imaginative fancy, or even a remark of more basic origin. Like good conversation, there was no telling in which direction the talk may lead: you just had to keep listening lest you miss anything on the way.

Chris Biscoe led the way into Gerry Mulligan’s ‘Standstill’, a swinging number from Blues in Time, the full-tone of his baritone contrasting beautifully with Allison Neale’s poised and feather-light alto. Colin Oxley’s flamenco-esque guitar, and the gentle breeze of the rhythm section, added a ‘Spanish tinge’ to Then and Now, a Biscoe original and the title track of the band’s album launched earlier this year.

Dave Whitford’s arco bass introduced Easy Living, a gorgeous ballad closely associated with Billie Holiday, in which the fragile delicacy of Allison Neale’s alto especially impressed. The great songwriting team of Rodgers and Hart came up with Lover as long ago as 1932, and it’s been played as an out-and-out swinger ever since. Tonight was no exception: a tour de force of technical brilliance, invention. and good taste.

One can never tire of All the Things You Are, which has been a firm favourite with jazzers since the mid-forties, though I believe composer Jerome Kern’s wife (or perhaps it was Kern himself?) objected to them taking with what were seen as liberties with the tune. It’s just too rich in possibilities. Biscoe, Neale & co explored them to the full. The arrangement used space to wonderful effect: at times notes simply hung in the air. A richly sonorous Bach-like figure, of which Gerry Mulligan would have been proud, brought the number, and the first set, to a close.

‘It’s all right,’ Chris Biscoe reassured the audience when only four musicians appeared on the stage after the interval. ‘We haven’t had a band bust-up in the dressing room. Colin simply takes a break on this one.’

In fact, the band now mirrored the original Gerry Mulligan piano-less Quartet of 1953, which brought him and trumpeter Chet Baker to world-wide attention. Allison Neale’s arrangement of How Deep is the Ocean provided the starting point for a series of improvisatory delights from the two saxophones, aided by Messrs Whitford and Butterfield on bass and drums, who form an ideal rhythm team for this style of music.

Colin Oxley returned to the stage and soon made his presence felt on the Biscoe original Rest Easy, with his imaginative soloing and perfectly placed interjections to the ensemble; he knows intuitively when to give the music a lift, or when to point things in a new direction.

Meanwhile, it’s hard to believe that the baritone saxophone is Chris Biscoe’s second instrument. He is of course best known for his innovative alto playing. Star Dust provided the opportunity for Chris to introduce his third instrument, the rare (and in my case, never-seen-before) alto clarinet – a visual marvel, with a sound to match. He proceeded to re-cast the Hoagy Carmichael warhorse in an entirely new mould.

In 1953, Desmond and Dave Brubeck argued fiercely before taking the stage for a concert by the Brubeck Quartet at Oberlin College. It continued to rage throughout the concert, though in more subtle form, with each player determined to out-do the other. Adding to the tension of the occasion, bassist Ron Crotty had just handed in his notice, while drummer Lloyd Davies was suffering the full effects of flu with a raging temperature of over a hundred degrees. Despite this (or perhaps because of it) the quartet played brilliantly, with Desmond hitting top form on Star Dust, from which Allison Neale freely adapted her solo. A recording of the concert proved a great success on its release, though by all accounts, neither Brubeck nor Desmond could ever bring themselves to listen to it.

Indian Summer a lovely song from Victor Herbert, paid tribute to another great alto player and contemporary of Paul Desmond, though he hailed from this side of the Atlantic, the late Bruce Turner.

The cool sound of the band could be deceptive. Did it really race along at such high speed on the final number, The Way You Look Tonight? The answer is, yes indeed!

Gerry Mulligan and Paul Desmond were Two of a Mind in another respect besides music …they loved puns, spoonerisms and any form of word play … it was therefore fitting that Two of a Mind should finish their gig with the bluesy, rip-roaring Blight of the Fumble Bee. A great evening and a wonderful tribute to Gerry Mulligan and Paul Desmond; two giants of the saxophone.

Our thanks, as ever, to everyone at the Progress Theatre for their warm hospitality and for making sure that every detail, from the sound and lighting, to the service at the bar ran smoothly.