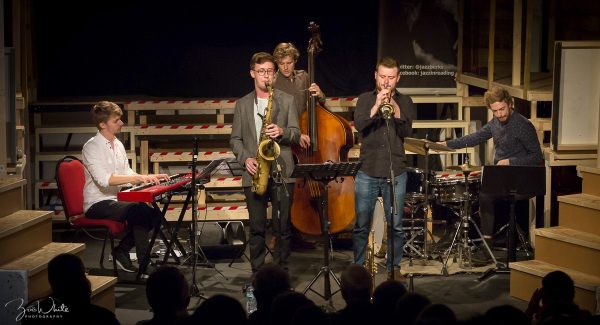 ‘This is going to be a special evening,’ promised Master of Ceremonies, Bob Draper, as he introduced the latest evening of jazz at the Progress Theatre on Friday 22 September. ‘This young man really impressed me when I saw him playing a short while ago with Art Themen. “We must have him play at Reading,” I thought. Ladies and gentlemen, he’ll have you on the edge of your seats … Alex Hitchcock and his quintet.’

Jazz at Progress offerings are never less than excellent, but true to Bob’s word, this gig hit the more distant realm of the truly special. Let’s have a look and see why.

In the first place, Alex has assembled a young band of outstanding talent and ability.

Will Barry’s keyboard technique is simply breathtaking. An endlessly inventive soloist, he conjures gorgeously celestial sounds from his instrument to give the music a wonderful sense of space and freedom. Oh that we could hear him play a grand piano! What a treat that would be.

James Copus? Where to start? Think of all the qualities that make a great trumpeter: a full brassy tone, dazzling runs and immaculate articulation, a range that sends the high notes soaring into the stratosphere, imagination and sensitivity … James has all these and more.

Joe Downard on bass can ‘walk’ with the best. But more than that, his playing, allied to that of Barry, and Jay Davis on drums, adds a richness of colour and texture to the music, sometimes to startling effect. At one point he created, though goodness knows how, what can only describe as a ‘blunt thud’. It was a moment to prompt the old adage, ‘If it sounds right, it must be right’. This did. Marvellous!

Sticks, brushes, mallets and hands, Jay Davis makes full use of all his percussive tools to keep the music flowing freely and to add further layers of sound to the musical palette. To the delight of these ears, he demonstrated that simplicity, in the form of a press roll a la Art Blakey, or a single, well-placed beat on the snare drum, can be infinitely more effective than a complex display of drum pyrotechnics.

And what of the leader, Alex Hitchcock? He stands absolutely still as he plays, facing the audience directly. It’s an affirmative stance. Only the expression of deep concentration on his face and the lightning speed of his fingers as they negotiate the keys of his instrument, give a clue to the ideas and emotions cascading from his imagination, to emerge as perfectly shaped notes and beautiful phrases from the bell of his saxophone. It’s a spellbinding process to witness and he makes it look so easy.

Secondly, Hitchcock’s possesses an essential quality of good leadership; knowing how to put together a set list, which balances his own original titles with familiar standards. The More I See You set the evening in motion, a tune best known to me as a 1966 hit for Chris Montez, though it’s been recorded by a host of jazz stars, including Chet Baker, Count Basie and perhaps most tellingly, by tenor saxist Hank Mobley. The gig closed with a wonderfully re-worked arrangement of On the Sunny Side of the Street. In between we enjoyed a range of Hitchcock originals, plus the tender ballad, Just as You Are, by Will Barry, and the concise and beautifully expressive Johnsburg, Illinois, from the pen of Tom Waits.

Which brings me to Hitchcock’s writing. If I suggest that it reminded me of Miles Davis’s classic quintet with Wayne Shorter, that will give you some idea of the impact it had on me. It’s tightly disciplined, in the best sense of the word, with the front-line of Hitchcock and Copus playing as one, but with a sense of space that allows soloists to explore the themes in any direction they choose.

Adjective Animal, (a title derived from the current fashion for using an animal name in a band’s name and preceding it with an adjective, or in the case of Big Bad Wolf, two) was perhaps the most ambitious piece of the evening, in terms of both length and complexity, but Gift Horse, A38 (an evocation of a recent trip to Budapest and a trip on the Danube on Boat No. A38), Sorry not Sorry, and a dedication to the ill-starred fortunes of Fulham Football Club, proved equally enthralling. However, Blues for J.C. topped the lot for sheer incandescent excitement. It swung like the clappers, with dazzling solos from each member of the band and a cracking ‘free’ duet between Hitchcock and Jay Davis.

The players, the music, the programming … each of these elements contributed to a very special evening of Jazz at Progress. But there is one key element so far missing from the list: Alex Hitchcock himself. This young man has remarkable poise and self-assurance. He is a relaxed and natural band leader, with a warm, good-humoured and generous personality that readily communicates with musicians and audience alike. He has already made a terrific impact on the UK jazz scene within a very short space of time, and I have no doubt that his star will continue to ascend in the year to come.

He recounted two hilarious tales from the band’s recent tour of Central Europe (incidents in fact, which had taken place barely two days earlier); an encounter with a gun-toting cigarette salesman in Krakow, and the hazards of indulging in Hungarian culinary delights on a boat trip in Budapest (hence the aforementioned Boat A38). And at the end of the evening, he displayed huge appreciation for the audience, reserving special praise for the hospitality of the Progress Theatre, and the sound and lighting skills of Martin Noble

Could it be, he suggested, that the great quality of the sound might also have something to do with the band’s set-up on stage – a closely confined arrangement amid a partially constructed set for a forthcoming production of Hamlet. Perhaps another benign influence could have been at work throughout the evening; that of ‘poor Yorick’?

His skull made an appearance at the beginning of the second set, as a prop to assist Bob Draper make the draw for the presentation of the ‘Golden Ticket’ prize, and remained on stage for the rest of the performance. ‘I’ve played to audiences that looked like skulls,’ remarked Alex Hitchcock, ‘but never to a genuine skull.’

A very special evening indeed! There is just one last thing to be said, and this is for the benefit of all jazz club promoters – BOOK THIS BAND! NOW!