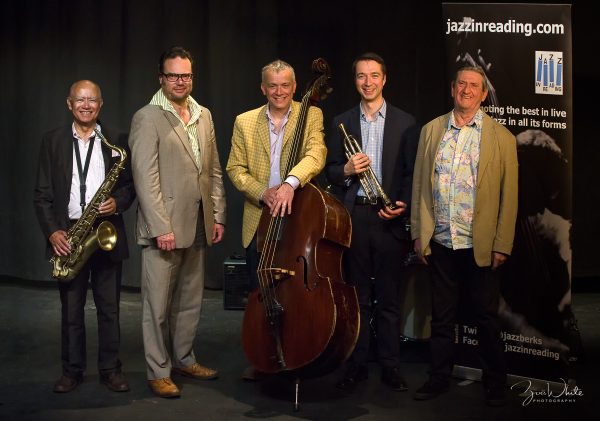 Spun so charmingly we willingly share the illusion that the secret to successful band leading is to surround oneself with players better than oneself. If the words had been uttered by anyone else we might even have believed in them, but here, centre stage of Reading’s Progress Theatre,  stands Art Themen before a sell-out crowd; testimony in itself to the enduring inventiveness of his talent and immense popularity. Yes, the musicians he now introduces are giants of their instruments and yes, each is a leader in his own right, possibly with an ego to project, but one can’t but help detect a spirit of generous warmth in the air, which makes the gig unmistakeably Art’s – we know that we are set for an evening of exceptional music and great fun.

Pianist, composer and bandleader, the late Horace Silver possessed the rare gift of creating tunes popular with both jazz improvisers for their musical challenge and with the wider public for their catchy melodies and earthy rhythms. The second number, ‘Ecaroh’ (try reversing the letters), which actually dates way-back to 1952, was a good case in point. Blues tinged and with a distinctly Latin feel, ‘Ecaroh’ set the fingers snapping and feet tapping.

‘How My Heart Sings’, from the pen of Earl Zindars and famously interpreted by Bill Evans, brought a change of mood. Fishwick and Themen switched to flugelhorn and soprano sax respectively to beautifully capture the reflective qualities of the song in gentle waltz time. Gareth Williams’ ‘moonlight’ touch on the keyboard and the palpable empathy between himself, Somogyi and Barry, a combination of sensitivity and strength, proved irresistible.

Themen was at his expressive best in the ballad feature ‘Spring Can Really Hang You Up The Most’, drawing every drop of emotion from this bittersweet standard; the inspired product of song writing team Tommy Woolf and Fran Landesman, who took the opening line of T.S. Eliot’s ‘The Waste Land’, ‘April is the cruellest month’, and placed it in a jazz setting.

‘Dizzy Moods’, kept everyone on their toes. Full of the passion, energy and unexpected twists and turns one associates with the compositions of Charles Mingus, it brought the first set to an explosive conclusion.

Apart from being a very funny guy, with an hilarious flow of on-stage banter, Gareth Williams is an extraordinarily fine pianist, as he demonstrated to brilliant effect in the introduction to the Bill Evan’s classic ‘Peri’s Scope’, which set the scene for dazzling solos from the other members of the band.

In total contrast, the out of tempo introduction to Cedar Walton’s ‘Midnight Waltz’ kept everyone guessing as Arnie Somogyi and Dave Berry led the way through a labyrinthine pattern of sounds, patterns and changing rhythms. Great fun, but every bit as bewildering as the warren of passages and rooms behind the Progress stage. As if by magic, the tune emerged from the apparent chaos. Perhaps this is what an unnamed critic meant when he coined the phrase, ‘divine rampage’ to describe the jazz ethic.

The task of making the spoken introduction to John Coltrane’s monumental ‘26/2’, a number Art Themen later described as an ‘A Level piece’, fell appropriately to Steve Fishwick, Professor of Jazz Trumpet in no less than three of the UK’s most prestigious music colleges. ‘This is a piece,’ he explained, ‘in which Coltrane transposed the chords of‘Giant Steps’ on to those of Charlie Parker’s ‘Confirmation’. He made it sound all so simple.

The result was anything but simple; a tour de force of technical brilliance, with first Themen and then Fishwick navigating a course through the changes at break-neck speed, with the aid of Gareth Williams, eyes firmly set on the musical compass, and the Somogyi/Barry rhythm team making sure that the boilers maintained a full head of steam. Breathtaking, is the word that immediately comes to mind!

‘I Fall In Love Too Easily’, a beautiful ballad by Jule Styne and Sammy Cahn, which first made its mark when sung by Frank Sinatra in the 1944 film ‘Anchors Away’, brought a welcome sense of calm after the storm. Steve Fishwick’s solo feature, with its superb articulation and breathe control, held the audience spellbound.

Topped by a rhythmically complex and super-charged drum solo by Dave Barry, the gig came to a close with the band in full flight on ‘Nutville’, another piece from the prolific pen of Horace Silver. An encore? Of course …  the rapturous applause of the audience drew the band back on stage to round off an evening of true jazz delights with Kenny Barron’s ‘Voyage’.

As ever, our thanks to Martin Noble, sound & lighting man par excellence, and to Stuart McCubbin and his Front of House team for their warm hospitality and attention to detail.