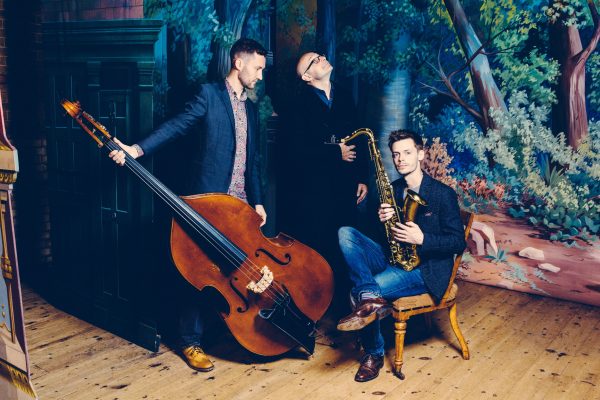 Partikel, Duncan Eagles on tenor saxophone, Max Luthert on bass and Eric Ford on drums, augmented by guitarist Ant Law, brought their vibrant mix of lyrical melody, vivid sound colours, and pulsating rhythms, to a spellbound audience at Reading’s Progress Theatre on Friday 5 May on a leg of their Counteraction tour; a new album shortly to be launched at King’s Place in London.

Challenging, unpredictable and utterly compelling, Partikel’s original and collective approach, with it’s liberating sense of time and space,  shakes one out of the comfort zone of familiar standards, twelve-bar blues and strings of solos, to view the possibilities of creating jazz in a fresh light.

Tenor saxophonist Duncan Eagles provides a strong lead voice and takes on the lion’s share of compositional duties. Eschewing a microphone he made brilliant use of the Progress Theatre’s natural acoustic and the full range of his instrument; a barely audible whisper, a fleeting run into the higher register, or a clarion call as forceful as any brass section, to create an endless flow of melodic lines rich in light, shade and texture.

His compositions bear witness to his life and experience; the exotic and the everyday. ‘Shimmer’, which he described as ‘the happiest piece of music that I’ve ever composed’, brought an evocation of the tranquillity, unique light and tropical humidity of Cambodia.  The contemplative ‘Lanterns’, an impression drawn from the band’s recent tour of China, could almost be described as an elegy for the ‘positive, peaceful vibe’ of the sadly fast-disappearing street life of Beijing; rapidly being swept away in the wake of urban ‘renewal. Eagle’s passionate tenor and Eric Ford’s swirling percussion added tension and drama to ‘Land and Sea’, while ‘Midnight Mass’, ‘Suburbiton’ and ‘Wray Common’ conjured images from closer to home.

An unbridled tear-up through ‘Scenes and Sounds’, brought the house down as the opener to the second set. And if anyone should doubt Eagle’s jazz credentials, then listen to ‘Bolden Days’, an affectionate portrait of the legendary Buddy Bolden, a creator of jazz in New Orleans, whose sound, it is said, could be heard ‘twenty miles away’ when he played outside. And for any ‘mouldy fygges’ tempted to suggest that well-schooled, music college-educated jazz players of the present lack the personality to express themselves like the self-taught masters of the past, take a listen to this young guy and think again!

Duncan Eagles is undoubtedly Partikel’s principal voice, but as I’ve already commented, it is a collective band with everyone feeding into the creative melting pot and above all, listening to each other.

Rather like Ron Carter’s crucial role in the great Miles Davis Quintet of the nineteen-sixties, bassist Max Luthert’s perfectly placed notes, often felt rather than heard, ease the music seamlessly into new directions.  And also like Carter, his bass has a rich tone, full of expressive qualities that enjoyed full rein in the solo introduction to his composition ‘Moving Fields’.

Eric Ford provides the other half of the band’s rhythm source, combining with Luthert to imply a liberating sensation of time; subtle, ever changing, but rarely ever directly stated. He draws an aural kaleidoscope of sounds from his uniquely customised drum kit, filling in the colours and adding emotional depth to Eagle’s musical sketches.

Ant Law’s guitar hinted at the direction the Partikel is taking with its new album Counteraction, in which the band is further augmented by strings, a second saxophone and electronic wizardry. Its metallic, almost ethereal qualities added a fascinating contrast to the Partikel sound palette. Law also contributed ‘Aquilinus’ to the band’s book, explaining that it was the only word of interest that he derived from a recent reading of H.G. Wells’ dystopian novel, ‘When the Sleeper Wakes’. Make of it what you will, but for Aquilinus read ‘Eagle-like’.

By the way, lacking a music stand, he rummaged through the theatre’s props cupboard to find a nice wooden tea trolley for the job. He arrived on stage looking as if he were about to serve refreshments to the band and audience.

As ever, the Progress Theatre proved an ideal venue for such an intensely listenable band, with a perfect balance of sound in which every nuance could be enjoyed with crystalline clarity; Partikel and audience truly felt as one. Thanks are due to sound/lighting wizard Martin Noble, and to Stuart McCubbin and his front-of-house team, for their warm welcome and hospitality.

Counteraction clearly marks a watershed in the evolution of Partikel. One hopes that in exploring new territory they will not lose the empathy and interaction which is such a distinctive feature of the band. They extol the joyous spirit of adventure that makes for great jazz, and makes them one of the most exciting bands on the current UK scene.