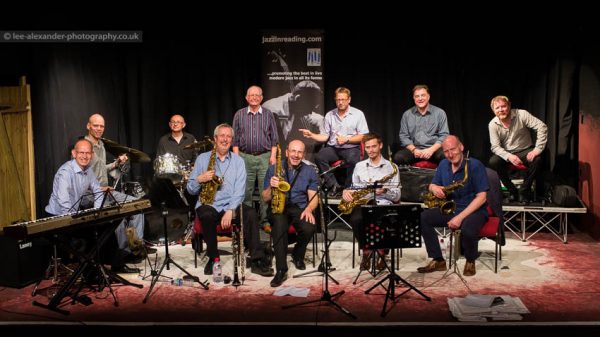 This image must not be copied, reproduced, distributed, transmitted, displayed or published without my express permission. © Lee Alexander Photography.

From its formative days the development of jazz has been inextricably linked with the church, sometimes as a source of spiritual inspiration, often as a practical training ground for generations of singers and musicians; Thelonious Monk accompanied his mother’s singing in church, and as an influence on the constantly evolving sounds and styles of jazz expression. Where would we be without ‘When The Saints Come Marching In’? And how often do words like ‘soulful’ or ‘spirited’ crop up in even the most academic of jazz criticisms? The nineteen sixties saw a spate of titles like ‘The Preacher’ or ‘The Sermon’, Duke Ellington devised his own form of worship through his Sacred Concerts, John Coltrane set off on a spiritual journey through ‘A Love Supreme’ and beyond, though some will argue that his quest took him to regions where neither God nor the sun managed to shine. Closer to home, Michael Garrick took the Litany and placed it in a jazz setting with ‘Jazz Praises’ which raised the comment, ‘Ferocity in Church’ when it was performed in St Paul’s Cathedral. Such ventures have divided critics and fans alike over the years, but there can no denying the link between the church and jazz, anymore than we can deny the significance of the role played by jazz bands in New Orleans burials. It’s not just the stuff of legend, it’s a huge part of the music’s heritage.

Let’s now switch our attention to St Andrew’s Baptist Church in the Thameside location of Shepperton in west London, where Scott Willcox formerly directed the music. Thirty-five years ago he tired of searching for new music to enhance the services, decided on a little DIY and wrote his own. He has since built up a remarkable body of work, which embraces all forms of musical styles and which has been performed at The Albert Hall, the Purcell Room, St. John’s Smith Sq., Fairfield Halls and Westminster Central Hall. His unique approach to big band composition and arrangement has emerged more recently; first with the ensemble Backbeat, which evolved into the wonderfully named Band Substance and eventually, to bring the music to a jazz audience, the fifteen piece Scott Willcox Big Band.

A scaled-down ten piece version of the band not only filled the tiny stage of Reading’s Progress Theatre on Friday 27th May, but very nearly blew off the roof with its impressive sound and boundless energy. It has to be said, however, that things started a little more gently and perhaps rather deceptively, with a nicely shuffling arrangement of Carole King’s ’I’m Into Something Good’. ‘Regular Fries’ revealed the full impact of the band’s sound, the range of Willcox’s musical imagination and the fascinating originality of his compositional style. It’s tightly written, themes develop in wave-like motions, with each musician adding his distinctive voice to the ensemble, sometimes alone in short phrases or in an ever changing variety of combinations with other instruments. It’s kaleidoscopic in effect, though firmly anchored by the magnificently punchy drumming of Eric Ford and the tireless efforts of Nick Mills, the ‘one-man’ trombone section who worked his socks off throughout the evening from a rather solitary position in the corner of the stage. The pieces tended to be quite short; Willcox resists the temptation to open things up with extended solos, concentrating instead on the structure of the compositions, though having said that, the evening featured wonderful individual contributions from each of the players.  It’s as if Willcox has resurrected the concept of the 78 rpm record format, making sure that not a single note is wasted within the short running time. Compositions end, once the musical statement is complete, with a firmly applied full-stop, or an enigmatic question mark, leaving the listener to wonder where the music might next lead.

I hope this doesn’t make the music sound staid or contrived. It’s not! ‘African Dance’ was full of gaiety, a riot of rhythm and rich sound colours, brilliantly evoking the intense sunlight of the African landscape, while ‘Casa Andreina’ brought to mind a more restful scene of Atlantic rollers brushing a Canary Island seashore. The band raced like the clappers on ‘Go For It!’, ‘Bouncing Back’ and ‘All Change’, an edgy, nervy, harum-scarum train ride of a number, with each player desperately holding onto the count for fear of falling off, and set feet tapping and the hands clapping with ‘Can’t Complain’, an intriguing number featuring Nick Mills, the tenor duo of Duncan Eagles and Julian Costello plus the rhythm section, and ‘Make Mine Mambo’. ‘2nd Thoughts’, with the muted trumpets of Gabriel Garrick and Andy Gibson, was more gentle in approach and reminiscent of Neil Hefti’s writing for Count Basie.

Willcox’s writing was at its most expressive in ‘Song For A Special Friend’ and the sublime settings of the traditional folk songs ‘The Water Is Wide’ and ‘Slane’ (a tune perhaps best known in its hymnal form as ‘Lord of All Hopefulness’). Tony Woods soloed beautifully on each, first on alto and secondly on soprano. ‘Where Next?’ was also deeply moving, almost mournful in effect with a haunting solo by Julian Costello and atmospheric piano from Dave Frankel. Despite its title ‘The Eternal Triangle’ was more an exploration of relationships in time rather than human affairs; excellent bass line from Ben Hazelton and an incisive clarinet solo by Bob McKay.

Scott is possibly the least demonstrative band leader you will ever find. He directed operations from a precariously balanced music stand at the front of the stage, counted the musicians in and then retreated stage left to let the scores speak for themselves via the skill, talent and experience of the assembled musicians who clearly relished the challenge of the writing. He would sometimes gesture with his hand to indicate either less or more power, and only reappeared to bring a number to an emphatic close. He is also blessed with a gentle sense of humour, announcing ‘Bouncing Back’ as being composed by the Irish tunesmith ‘Rick O’Shea’ and presented a delightfully cheeky ‘Putting on The Ritz’, in which even Fred Astaire would have been hard-pushed to keep pace with the tricky arrangement.

By his own admission, Scott Willcox is a modest pianist and barely competent guitarist. No matter, he expresses himself perfectly and with great honesty through the joyous sound of his big band. His orchestra truly is his instrument.

I may be in danger of repeating myself, but there can be no doubt that the intimacy of the Progress Theatre, its fine acoustics and unique atmosphere has an inspiring effect on both players and audience alike, a quality which readily communicates itself. It really is a great venue for jazz gigs and once again many thanks to the team who make it all possible.