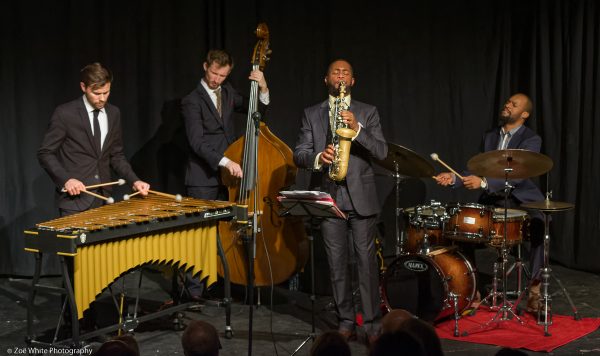 I first came across Nathaniel Facey when he was touring with trumpeter Abram Wilson, who tragically died a few years ago. Also in the band was Shaney Forbes. They were at Trinity College at the time, and both stood out to me as stars of the future.

Sure enough, a couple of years later, I saw that they had formed a band called Empirical. This was the band’s first incarnation and as a quintet were booked in 2007 for my series of “Jazz n Stuff” at South Hill Park, Bracknell. Jay Phelps on trumpet with Kit Downs piano were the members of the band who subsequently left and Lewis Wright joined in 2008.

So, being together for almost nine years means that these guys have developed an in depth musical understanding, obviously appreciate their individual influences and those that are mutual. The result is recognition by numerous bodies over the years, including in 2016, Ensemble of The Year  Parliamentary Jazz Award and Best Jazz Act at Urban Music Awards. and several acclaimed albums, most of which feature original compositions and could be easily described as in the genre of Contemporary or indeed, Free Jazz.

Which brings me to the performance at Progress on the 16 December.

This comprised music from the latest CD, “Connection”. I think it fair to say that the audience in the majority was not familiar with the band’s music or ability. Of course, within a few moments of the opening number they were absorbed and won over.

The compositions all displayed the aim of wishing to connect with the audience from a rhythmical point of view and to make the improvisations and interplay during those individual moments exciting and approachable. Each composition had a melodious feel and chord structure to enable soloists to stretch out and dazzle.

I am a big fan of the vibes and Lewis Wright brings out the beauty of those shimmering chords under the free flowing alto of Facey or polyrhythms of Forbes. Not to mention the intricate bass solos and ever inventive bass bedrock exhibited by Tom Farmer, who also wrote the majority of the tunes.

As is usual in a live performance, the tracks on the album became stretched out compared to the recording. Never did I feel that a soloist overstayed his welcome such was the brilliance of each individual and the changing nuances of the ensemble sounds behind solos. In fact, it was noticeable that the audience was so absorbed by the music and what was going on, that the habitual and normal applause for a solo did not happen as it usually would.

After two hours of fascinating and yes, beautiful, music, our attentive and enraptured audience gave the band a lengthy closing ovation that resulted in a welcome encore and a satisfying conclusion to the gig.