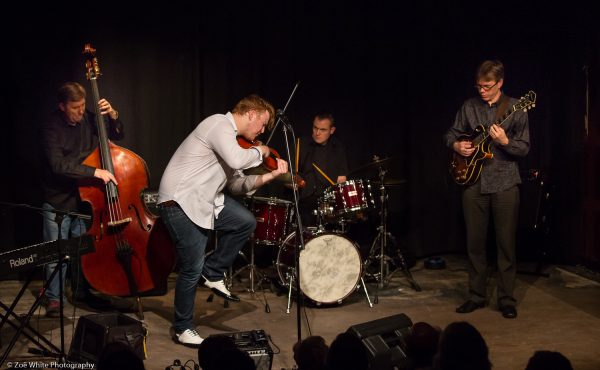 The irrepressible force of human of nature that is Ben Holder sent shock waves through the Progress Theatre from which it is no doubt still reverberating many days after his appearance on Friday 4 November. One is swept along by the astonishing power of his stage personality, the infectious joy of his playing – virtuosic violin, engaging vocals, raucous piano, and irresistible sense of fun. Ben Holder is the complete jazz entertainment package, interpreting the past glories of the Great American Songbook with his own original compositions in a way that is in complete accord with the ears of a contemporary audience. Indeed, here’s a suggestion: an evening with the Ben Holder Quartet should be available on prescription from the NHS as a restorative for all known ailments

Yes, one could argue that sometimes his playing bordered on the frantic and that he seemed dead set on packing every note possible into each solo (Didn’t Art Tatum and Oscar Peterson once face the same criticism?). But frankly who cares. There’s nothing contrived or mechanical in his playing; it simply oozes with jazz spirit, spontaneity and a carefree determination to push the boundaries of expression to their full limits. And yet, a single, beautifully placed note in Hoagy Carmichael’s ‘Sky Lark’, breathtaking in its purity, pointed to an emotional depth that Holder has yet to explore. His potential to become a great musician is enormous

While the hyper-active Holder paced the stage, ripping through standards such as ‘Cheek To Cheek’ and ‘They Can’t Take That Away From Me’ or bringing a fresh interpretation to the Lennon and McCartney classic ‘Can’t Buy me Love’ (he really does excel at getting into the story of a song), switching seamlessly from violin to vocal or piano, one couldn’t help but be impressed by the avuncular presence of Paul Jefferies and Jez Cook. The combination of Jefferies’ rock-steady, rich toned bass and Cook’s lyrical, blues inflected guitar really held the band together. Meanwhile, Dave Wilkes’ powerhouse drumming, ever alert to any mischief his leader might be getting up to, kept things swinging. He’s an absolute master of the ‘shuffle’ rhythm. Had space in the tiny Progress auditorium allowed, the audience would surely have been on their feet and dancing in the aisles to the Louis Prima-styled numbers ‘Pennies From Heaven’ and ‘I’m In The Mood For Love’

Holder has a true entertainer’s feel for ‘playing an audience’. Everything is delivered in breathless style – literally, and just as one wonders whatever is going to happen next, a sharp intelligence restores order to the apparent chaos. The programme is perfectly arranged. A technically brilliant original such as ‘Sweet Potato’ balances more familiar fare like ‘It Don’t Mean A Thing If It Ain’t Got That Swing’’, the gorgeously romantic ‘I Wish You Love’ from the pen of Charles Trenet or ‘Rosetta’, a rarely heard gem from Earl Hines. All of which is interspersed with hilarious ‘chat’, ranging in subject matter from the state of modern song writing to the embarrassments of mispronouncing the French language to a French audience, or misusing the French language entirely whilst pursuing a courtship with an, unbeknown to him, French translator

The abiding strength of the band itself is the understanding and empathy between its four members, allowing the music to head off into new territory with lightning speed. ‘You’, a bluesy original with a latin feel, was developing a nice head of steam, when Holder’s strummed violin signalled a swift gear change veering the tune into ‘St Thomas’ and in the process transforming Sonny Rollin’s relaxed calypso into an errant flagwaver. Similar magic was at work at the close of the evening. Ben Holder’s conjurer’s hand transformed a blistering ‘Billie’s Bounce’, into a rocking ‘Route 66’ which vied back-and-forth with ‘When You’re Smiling’ as the finale to an amazing gig

As the audience reluctantly made its way out of the Progress into the dark November night, Jazz in Reading’s Steve Wellings was knocked out by the number of positive comments made to him. ‘I don’t ever remember hearing such a generous response to a band,’ he commented. All of which makes one aspect of an otherwise outstanding and truly memorable evening doubly disappointing; the number of empty seats! Jazz in Reading fans, where were you?

To echo a remark from Gabriel Garrick, ‘An audience! This is what we want. Let’s stand on the rooftops and shout, “Wake up! Let’s fill the venues and really get jazz happening!” he declared shortly after his 2015 Progress gig with his Expansions Quintet. Hear,hear