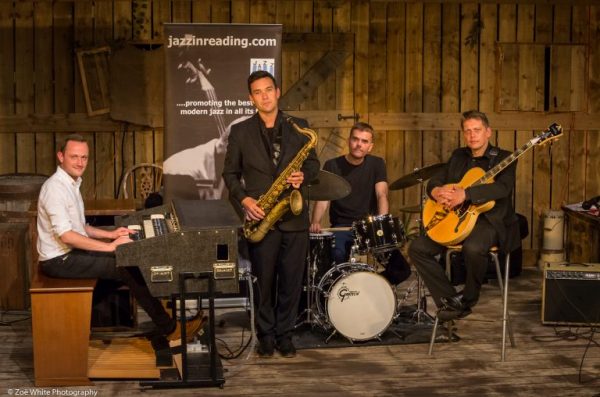 The buzzing full-house at the Progress Theatre bore witness to a series of remarkable ‘firsts’ on Friday 2 September. The first gig in the new season of ‘Jazz in Reading’; the first date in the Nigel Price Organ Quartet’s Arts Council funded national tour; the first time that Nigel has ever played in a c.1942 Malayan miners’ hut – reference to the stage setting for the forthcoming production of ‘The Long and The Short and The Tall’, and the first time that a ‘real’ Hammond organ has graced the theatre’s stage. No doubt many giants of the theatre have trodden its boards, but the Hammond, with its unique and all-embracing tones, stood in a class of its own.

On such an occasion, there could only be one choice for the opening number; ‘This Could Be the Start of Something Big’. After a beautifully mellifluous introduction from Price, it was a case of ‘all hands to the pump’ as Brandon Allen’s fiery tenor set Steve Allen’s classic swinger in full motion. One can only hazard a guess at what heights the band will achieve by the close of its 56 gig national tour. Incidentally this is the first jazz tour the Arts Council has supported for several years, for which Nigel has ‘sweated blood’ to get on the road. On the basis of this performance they are already fast approaching the magical number ‘11’.

And what about Ross Stanley’s Hammond organ; it truly is the ‘real’ thing, complete with a Leslie Cabinet, from which emanated the warm glow of its valves – no electronic simulation here! Ross Stanley produces a very personal sound, handling the huge keyboard with the deft touch of a Formula 1 racing driver. The instrument generates a powerful sense of tension and excitement like no other.

The Quartet’s strengths became more and more apparent as the set progressed, through ‘Stealing Time’ (a slightly quirky number based on the chords of Kurt Weill’s ‘Speak Low’) and ‘Darn That Dream’, a gorgeous tribute to the recently deceased guitarist Louis Stewart, which cleverly segued into ‘It Ain’t Necessarily So’. The contrast between the warmth and subtlety of Price’s guitar and the much harder edge of Brandon Allen’s passionate tenor works really well. There is an incredible level of understanding within the band and a special sense of space and time which keeps the music in constant motion and open to imperceptible shifts in mood, voicing and rhythm. Listening to the band, with its solo strength, awesome ensemble sound, underpinned by Ross Stanley’s organ bass-lines and the magnificently straight-ahead drumming and immaculate brushwork of Matt Home, was an absolute delight … and there was more to come!

Steve Wellings, founder and continuing inspiration behind ‘Jazz in Reading’ came to the stage at the opening of the second set to pay tribute to our ‘dear friend, colleague and jazz aficionado Nigel Dacombe who died in July’. Steve reflected on the arduous early days of ‘Jazz in Reading’, some twelve years ago, when he single-handedly multi-tasked as a booking, manager, promoter and publicist. ‘Nigel,’ he recalled, ‘was the first to put himself forward with an offer of help. I accepted with open arms.’ With his vast knowledge of jazz, accrued through hours listening at the record deck and travelling to hundreds of venues across the UK and beyond, Nigel proved to be a perfect colleague. He painstakingly compiled a comprehensive gig list as a free service to ‘Jazz in Reading’ enthusiasts, used his PR skills to publicize events and to secure coverage on local radio and brought his own stamp to booking bands – we have Nigel to thank for the appearance of the Nigel Price Organ Quartet.

‘His contributions to the team effort will be difficult to replace,’ Steve continued. ‘He will be sorely missed by those of us who knew and worked with him. Not least, by his widow Julie, and two daughters, Jo and Sarah, who have joined us tonight to help us remember him fondly, and to celebrate his life in jazz. As a mark of respect for him, we’ve arranged for tonight’s band to play one of his favourite tunes; appropriately, ‘My Favourite Things’. But first, if you have a glass in your hand, may I ask you to raise it to his memory – to Nigel.’

Alone, Nigel Price took up his place on stage to produce the most movingly, beautiful performance of ‘My Favourite Things’ that one could imagine, full or warmth and deep tenderness. As the band members joined him and with everyone in full flight the number gained in emotional intensity à la Coltrane in a way that Nigel Dacombe would, I hope, have thoroughly approved.

The unmistakable stamp of Henry Mancini could be felt throughout a fine performance of ‘Dreamsville’, one of his lesser known tunes, with lovely tenor from Brandon Allen before … ‘Someone’s gonna have a heart attack and it’s gonna be me,’ Nigel declared at the end of a breakneck-speed version of Toots Thielemans’ ‘Bluesette’ – a tribute to the Belgian composer, guitarist and harmonica player who died aged 94 on 22 August. It’s usually played in light-hearted waltz time. Not in this case – Nigel opened the throttle and it was ‘full speed ahead’. Fantastic!

Jule Styne and Sammy Cahn’s ‘I Fall in Love Too Easily’, an early hit for Frank Sinatra, helped restore pulse rates to normal, but not for long. Brandon Allen dug firmly into his blues roots to close the gig on the highest note possible with ‘Booze Blues’.

I could only think of one word to sum up the evening, ‘Wow’. Lovers of jazz across the UK – prepare to be taken by storm by the Nigel Price Organ Quartet. An experience not to be missed!