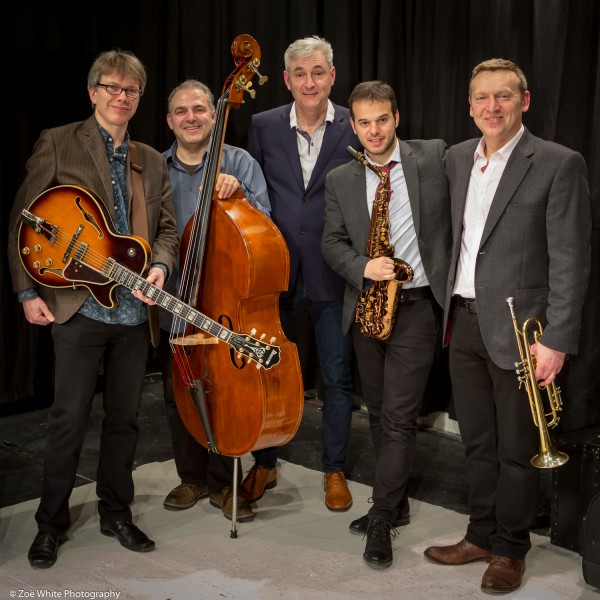 ‘Cookin’’ is an epithet that immediately brings to mind an entire genre of jazz associated with the Blue Note record label and the work of trumpet masters like Clifford Brown and Lee Morgan and tenor saxophonists Dexter Gordon and Joe Henderson; lyrical, technically challenging, emotionally charged and above all – hard-swinging and full of joyful spirit. It perfectly describes the music brought to the stage of the Progress Theatre by Stuart Henderson and Vasilis Xenopoulos with the Simon Price Trio.

‘Montmartre’, from the pen of Dexter Gordon, set the scene with Xenopoulos’ slightly laid-back approach on tenor contrasting nicely with the full-toned attack of Henderson’s trumpet. And yet one had the sense that rather like a well-tuned Formula-one racing car they were each holding back on their reserves of power, which added greatly to the tension and excitement of the playing. Guitarist Jez Cook, a last minute dep for the ailing Pete Billington, slotted into the band as if they had all been playing together for years, while Raph Mizraki on bass and Simon Price on drums demonstrated why they are held in such high regard locally and by visiting musicians to Reading.

‘Corner Pocket’ captured the spirit and unique dynamics of the Count Basie Orchestra in full-flight. A brief and rather cheekily inserted quote from ‘Cherry Pink, Apple Blossom White’ served to introduce Henderson’s beautifully warm and inventive contribution, paving the way for Xenopoulos to glide effortlessly into his solo and great exchanges between the various members of the band.

Before launching into the next number, Stuart Henderson took a short breather to make a pitch for CD sales at the interval. “Buy one, get one,” he announced in the inimitable manner of a guy with origins in the north-west of England. “Buy two,” he continued, his voice rising with excitement. “Get two!”

Tom Harrell’s ‘Terrestris’ (actually a fruit bearing Mediterranean plant with interesting qualities) brought a change of mood and settled into a Latin groove with Xenopoulos switching to alto. Henderson and Xenopoulos completed the number with some intricate interplay between alto and trumpet.

The first of two ballad medleys presented beautiful interpretations of ‘When Sunny Gets Blue’ by Henderson on flugel-horn and ‘Polka Dots and Moonbeams’ by Xenopoulos on alto, which led perfectly into a delightful arrangement of Fats Waller’s ‘Jitterbug Waltz’, with Jez Cook’s guitar to the fore together with the gorgeous tones of Mizraki’s bass.

As a near-teenager, Henderson’s son considered the word ‘swag’ to be the ultimate in cool. Hence the ‘Swag Meister’, an original from Henderson Senior, which closed the first set in fiercely-swinging style with growling trumpet adding to the fun.
The second set opened with Henderson leading the way on flugel-horn with a moving performance of ‘There Is No Greater Love’, a favourite from Miles Davis’ first quintet. Xenopoulos followed with a magnificent solo built in classic style with quotes flying by with lightning speed, before Cook took up the mantle on his guitar. The number finished with a superb ‘round-robin’ of exchanges between all the musicians.

‘Beatrice’ paid tribute to its composer Sam Rivers, whose seventy-fifth birthday celebrations Stuart Henderson memorably stumbled into during a visit to New York. Playing close to the mic with muted trumpet Henderson’s ‘walking-on-eggshells’ trumpet and Xenopoulos sparse tenor captured the poignant beauty of the tune, sensitively supported by Cook and the rhythm section.

No programme would have been complete without a blues. The band duly obliged with Clifford Brown’s ‘Sandu’. Jez Cook set the groove in mid-tempo and everyone dug in; a wailing solo from Xenopoulos on alto, Henderson’s shouting trumpet, the huge sound of Mizraki’s bass and Simon Price’s driving drums – his great sense of time, punctuated by the terrific range of sounds he extracts from his kit.

Stuart Henderson’s eclectic approach to his instrument found full expression in his contribution to the second ballad medley. ‘I Can’t Get Started’ revealed the full brilliance of his tone, and the lyrical beauty of his playing, polished over twenty-five years as a bandsman in The Regimental Band of Her Majesty’s Scots Guards. As he says, “You have to be heard when you’re on the parade ground.” A seamless take-over brought Xenopoulos centre stage to present an equally effective object lesson in ballad playing with his alto feature ‘Stars Fell on Alabama’.

The concert moved towards its conclusion with two numbers by the great pianist and composer Kenny Barron. ‘Sun Shower’, a beautiful theme but with a gentle bossa-nova rhythm and Henderson’s flugel-horn hinting at an underlying sense of melancholy. It grew in intensity with solos from Cook and Xenopoulos towards an incredible climactic duet between Mizraki’s bass; he used the strings and body to produce the most wonderful conga drum-like rhythms and Simon Price’s drums. ‘Voyage’, an out-an-out swinger, brought the evening to a close; officially at least, for the band launched into ‘Take The “A” Train’ as an encore. Taken at a furious pace it gave an indication of what it might be like to travel in the future on HS2!

I recently remarked jokingly to a friend that ‘Reading was the jazz capital of the world’. He eyed me scathingly and admitted grudgingly, ‘Possibly mid-Berkshire’.

No matter. The reality is that the locality is currently blessed with a wealth of talent, of whom Stuart Henderson is a central figure with regular gigs at the Flowing Spring, the Retreat and the Abbot Cook, as well as leading a big band at Finchampstead and inspiring a new generation of players in his role as Director of Jazz at Leighton Park School. He is a player of outstanding quality and has found a perfect sparring partner in Vasilis Xenopoulos. One could sense the challenge of fresh ideas bouncing back and forth across the bandstand, but importantly neither set out to ‘cut’ the other or to outstay his welcome. Moreover, Stuart’s travelling fan club added further enthusiasm to the always lively and welcoming atmosphere of the Progress Theatre. ‘Jazz in Reading’ scored again with an evening of superb jazz, which included a richly-deserved presentation to ‘House Photographer’, Zoe White, whose wonderfully atmospheric work captures the life and times of ‘Jazz in Reading’ in the gallery on its website.