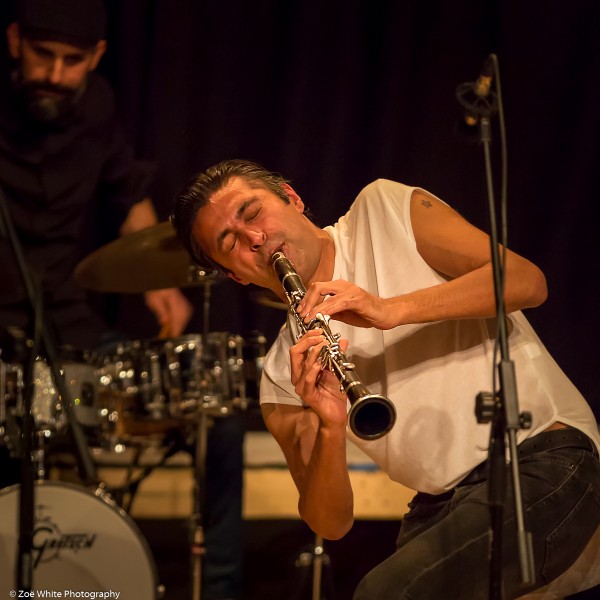 Perhaps it was reaction to the popular success of bandleaders from the Swing Era like Benny Goodman and Artie Shaw, or maybe for technical reasons, but there’s no doubt that the ‘bebop’ generation of jazz musicians and their followers held little regard for the expressive qualities of the instrument. Try to name more than a handful of ‘modern jazz’ clarinet players who’ve made their mark since the Second World War? You’d be hard stretched to name anybody beyond Tony Scott, Buddy De Franco and Jimmy Guiffre in the States, and Vic Ash and Tony Coe on this side of the Atlantic; and three of the aforementioned doubled on tenor saxophone!

Arun Ghosh, has dared to venture into this void as he demonstrated in an explosive manner at the Progress Theatre, on 26th February with his Quartet; Shirley Tetteh on guitar, Liran Donin on bass and drummer Rastko Rasic. Acker Bilk he is not! The lush buzz of a sitar launched Ghosh into his solo flight on the opening number Aurora, supported by a barrage of sound and shifting rhythms generated by his compatriots. The band had all the force and emotional power of the John Coltrane Quartet, richly flavoured with the spirit of the Indian sub-continent, plus a hint of Eastern Europe and West Africa, all via Ghosh’s home city of Manchester; music that simply swept you along with its vibrancy and wave after wave of invention.

Unravel followed a similar path, with Shirley Tetteh’s sparse guitar contrasting beautifully with the leader’s eloquence. Ghosh is a composer of striking originality. Uterine originally celebrated the birth of his first child and the miracle of new life, but on this occasion it was dedicated to the newly-born daughter of bass player Liran Donin. Rastko Rasic set the mood using mallets on his drums and cymbals, before Donin took up the theme himself in a remarkable solo of great virtuosity and immense power, which in turn laid the foundation for Ghosh’s contribution. Hair-raising yet deeply moving!

River Song, based on a folk-style used by Bengali fishermen, introduced a serenely contemplative atmosphere to the evening; the calm before the storm. Caliban’s Revenge, was written for Pete Postlethwaite and his role of Prospero in the 2007 production of The Tempest at Manchester Royal Exchange. It was described at the time as ‘ravishingly beautiful’ – a perfectly apt description for a truly thunderous conclusion to the first set.

Arun Ghosh is a wonderfully animated musician. Sitting cross-legged to the side of the stage, eyes closed, head swaying, he springs forward, stands bolt-upright on his toes and starts to weave his instrument in great circles as if he’s drawing in the music as much from the atmosphere around him as from his imagination. It’s a riveting spectacle, and uniquely effective way to lead the band. “I feel alive,” he declared at the close of The Gypsies of Rajasthan – as if there could be any doubt?

After The Monsoon, from Ghosh’s South Asian Suite, beautifully captured the cleansing effect of the monsoon and the welcome arrival of fresh, pure air. Longstone Lagoon was an equally vivid, though in this case colourfully riotous, evocation of a Manchester market set to the funky rock-beat of Rastko Rasic’s drums.

“What do you think?” Ghosh enquired, inviting comment from the audience. “Rubbish?”

Ghosh recalled a ‘Gig from Hell’ at a fashionable wine-bar in Canary Wharf, playing to a clientele more occupied in opening bottles of Dom Perignon 1981 than listening to the music. At the close of a particularly sensitive solo he was suddenly confronted by an inebriated yuppy who stood up and shouted, “Rubbish!!” “His timing was perfect,” Ghosh conceded.

A far cry from the Progress; Come Closer a beautiful love song was properly appreciated. No moronic behaviour here! Ghosh seemed lost in sound as he shaped his solo round the lower register of his instrument to great effect. At times his playing was classical in tone and manner; hardly surprising given his training at the Royal Northern College of Music and Cambridge, and study of Bach, Mozart and Brahms. But for the influence of the great Courtney Pine and the inspirational teaching of tenor saxophonist Mike Hall, Ghosh might have taken a different musical path, though it’s difficult to imagine how ‘serious’ music could ever have restrained the exuberance of his personality. Instead, to our great fortune, he followed his ‘rock ‘n’ roll’ spirit, fully affirmed in the final number Journey South another piece from the South Asian Suite, a depiction of travelling to Sri Lanka, which grew in intensity to a climatic maelstrom of sound. What a way to close a concert! Fantastic!

Arun Ghosh has found a new voice for the clarinet as a solo instrument. His music is urgent, alive, sometimes demanding, but incredibly exciting. In this he’s aided by his band members with whom he enjoys an almost telepathic understanding. With such an open attitude to music it will be fascinating to see where the musical journey next takes Arun Ghosh … very much a case of watch this space!

Once again the Progress provided the perfect balance of sound, lighting and warm hospitality to enjoy an evening of sensational and innovative music. Our thanks to all concerned and to the ‘Jazz in Reading’ team; demonstrating once more their commitment to bringing the ‘best in live modern jazz’ to the Progress stage.