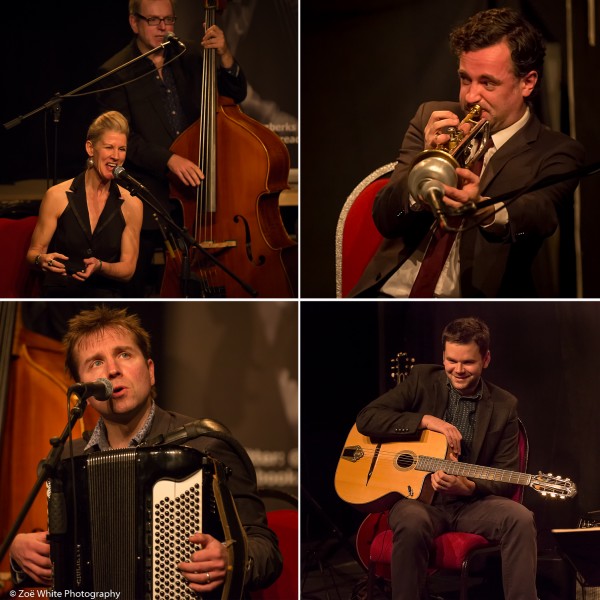 Who could resist the beguiling charms of Katya Gorrie as she opened the doors to the ‘Moscow Drug Club’, located for one night only in the dark recesses of the Progress Theatre, Reading, and invited everyone ‘to come in and have a smoke’. ‘This is the place,’ she said, ‘where the Reds play the Blues.’

Katya’s rich vocal tones, impeccable timing and perfect diction held the audience captivated as she held centre-stage with a wonderful sense of Grand Guignol theatre, and led her band of troubadours, Jonny Bruce on trumpet, accordion player Merek Salmon, Andy Bowen on guitar and Andy Crowdy on bass, on a story-telling journey through song. She drew every last drop of meaning from the lyrics of each song, while a knowing wink or the slightest gesture of the hand, gave the merest hint that … sometimes they were not quite as they first appeared.

And what stories and what songs! Can you think of a better opening number to set the feet tapping and the hands clapping than the out-and-out Latin-American gaiety of the Henry Mancini/Johnny Mercer collaboration, It Had Better Be Tonight, with its insistent refrain Meglio stasera, baby, go, go, go. When I Get Low I Get High from the pen of the unlikely sounding, Marian Sunshine came next, before The Gypsy With Fire In Her Shoes served as a reminder that behind the persona of ‘Miss Peggy Lee’ lay a song-writing talent of rare and poignant beauty.

I remember Yes My Darling Daughter as a bright and breezy hit for Eydie Gormé in the early 1960s, but its innuendo escaped my early-teenage understanding in those far-off days. Katya’s witty delivery left me in no doubts as to what the song was really about!

Bei Mir Bist du Schon, a great hit for the Andrews Sisters and a flag-waver for many bands of the Swing Era, almost brought the roof down. Driven along at breakneck speed by the tremendous ‘Two Andy’s’ rhythm team, it featured a sensational trumpet solo from Jonny Bruce. He soared into the stratosphere with thrilling knife-edge accuracy. No wonder he is such a sought-after musician. His range is absolutely remarkable, swooping from muted ‘treading-on-egg-shells’ delicacy to the highest reaches of his instrument. The edgy excitement of his playing and rich vocabulary of perfectly placed vocalised effects brought a great sense of drama to the evening.

The accordion is a sadly neglected instrument, more often seen gathering dust on the shelves of a junk-shop, than gracing its rightful place as part of a band. Merek Salmon is a master of the instrument, providing the perfect background to the sardonic humour of Belgian songwriter Jaques Brel, in Funeral Tango. Jacky, a second Brel number, played later in the programme, featured the singing tones of Andy Crowdy’s bass in a wonderfully inventive solo.

Juan Tizol’s Caravan, with its curious mix of exoticism and straight-ahead swing, is rarely performed as a vocal. More’s the pity! Katya’s rendition brought the first set to a resounding close, and sent the audience scurrying to the bar, eager for refreshment to set them up for the second half.

Andy Crowdy’s rasping trombone echoed the vocal tones of the songwriter himself, as we entered the grotesque world of Tom Waits with the first number in the second set, Tango Til They’re Sore. By turns absolutely hilarious and as one commentator has observed, ‘awesomely gruesome’, the band revelled in the macabre sentiments of the song, creating a nightmarish cacophony of sounds with simple, but well-timed interjections from Katya’s vibraslap.

We were ‘treated’ to more samples of Wait’s dark humour later in the programme with Temptation, featuring one of many exquisite solos from Andy Bowen and A Jockey Full of Bourbon. Meanwhile an invitation to meet ‘Queenie the cutie of the burlesque show’ as she performed to Johnny Mercer’s Strip Polka came as a welcome relief. The band members were in full voice to support Katya’s vocal.

Leonard Cohen’s Dance Me To The End Of Love brought an instant gasp of recognition from the audience. Beautiful solos from Merek Salmon and Andy Bowen captured the haunting melancholy of the song. Jonny Bruce took another leap into the unknown with a hair-raising solo loaded with power and incredible emotional intensity.

Sadly the journey in song was drawing to a close, but not before we visited a gypsy campfire to savour Charles Aznavour’s Two Guitars, before taking off for the eastern Mediterranean and our final destination Istanbul (Not Constantinople), an irresistible tune that would have sent the audience happily on its way home but for one unresolved question; why the Moscow Drug Club?

Did Katya really meet up with her dissolute bunch of minstrels in rehab after suffering the effects of a night at ‘The Moscow Drug Club’ – a place where members ‘could have a smoke’, cock-a-snoop at authority and relax in the musical intimacy of its intoxicating atmosphere. Not quite. B.B. Gabor, an émigré Hungarian songwriter who settled in Canada, concocted the deliciously decadent lyrics in what would prove to be the encore number for the evening – what else but the Moscow Drug Club.

Temporary membership of ‘The Moscow Drug Club’ expired as the final notes of the tune faded away. ‘The Moscow Drug Club’ is sensational and one can only hope that membership may be renewed in the not too distant future. More used to playing large festival stages, with distant crowds, the band clearly enjoyed the convivial atmosphere of the ‘Progress’ and the closeness of the audience. As ever the magnificent ‘house team’ ensured the smooth-running of the event with a welcoming smile, excellent sound and lighting, and superb service at the bar and front of house. Surely, ‘Jazz at Progress’, now entering its fourth year, must rank as a sought-after gig for Britain’s top jazz talent? Let’s also raise a glass to Steve Wellings, founder and inspirational force behind ‘Jazz in Reading’ who celebrated his birthday at the gig. Good health Steve!