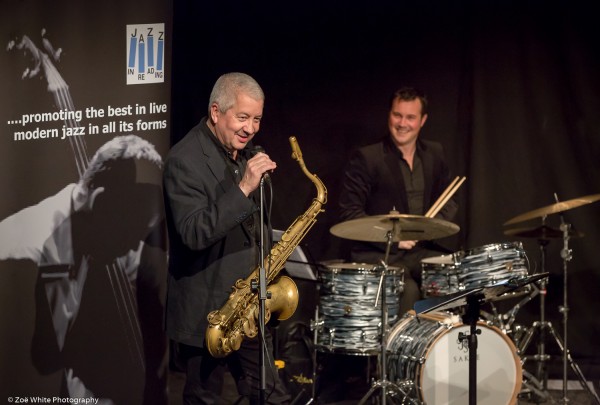 ‘Jazz in Reading’ brought a memorable year of jazz at Progress Theatre to a conclusion with an absolute box of delights opened by Andy Sheppard’s Hotel Bristol.

Since taking up the tenor saxophone at the age of 19, Sheppard has worked as a sideman with Gil Evans, Carla Bley and George Russell, led his own groups and recorded to international acclaim. A prolific composer, with over 350 titles to his credit, his writing encompasses works for solo performance, big bands and chamber orchestras. ‘Hotel Bristol’, in which he is joined by guitarist Matt Hopkins, Percy Pursglove on bass and trumpet and drummer Mark Whitlam, was formed to take part in the 2014 Tbilisi International Jazz Festival in Georgia in an exchange programme with the International Jazz and Blues Festival of Sheppard’s home town, Bristol.

Sheppard distils a wide range of influences to create a unique and utterly beguiling approach to his music. Like a latter day Lester Young, beautiful melodic phrases cascade from his saxophone, each note perfectly placed, and expressed with the clarity of crystal. Playing ‘Forever and A Day’, at a whisper and the slowest tempo imaginable, he held the audience absolutely spellbound and yet moments earlier he had filled the auditorium with the huge sound of his tenor, and almost set everyone dancing to ‘Du Du’. Like most of the pieces it was deceptively simple, a repeated pattern that drew forth a multitude of variations as it passed between the musicians, growing in intensity all the while. Hopkins and Whitlam suddenly dropped out of the mêlée, and at this point the band launched what Sheppard describes as ‘our secret weapon’. Pursglove, embracing his bass with his left arm, picked up his trumpet with his right hand, and began a wonderfully free exchange with Sheppard. Later in the programme he delivered a sparse, but emotionally charged trumpet solo on ‘What Will Be’.

As well as being an adventurous and original player, Andy Sheppard has a rare gift for intriguing titles. ‘Walk in The Park’ was straightforward enough, though the tune cast the mind’s eye of this writer to a sun-kissed tropical beach swept by a warm breeze. The origins of ‘Rubbernecking Solid Jackson’ remain a mystery despite the visual clues provided by the musicians, who stopped playing at one point and stared around the stage. ‘Smut’ was drawn from an Alan Bennett book of the same name that helped Sheppard while away the travelling intervals involved in foreign tour, but ‘Going Spooning’? Perhaps it alluded to the additional services of ‘Hotel Bristol’?

Andy Sheppard’s playing combined with the ethereal quality of Matt Hopkins guitar, particularly evident on ‘Bart’ (the only non-Sheppard composition in the programme) and the constantly shifting drum patterns of Mark Whitlam, who draws every sound possible from the resources of his kit, give ‘Hotel Bristol’ a wonderful sense of space and freedom, with its foundations firmly rooted in the bass of Percy Pursglove. Eschewing the use of amplification, except for Hopkins guitar, the band achieved a perfect balance of sound. Each musician could be heard clearly, all the more to enjoy the subtle interplay that is such an important part of the music.

The ‘Jazz in Reading’ team are to be congratulated on succeeding to book Andy Sheppard’s Hotel Bristol at such notice in place of Stan Tracey’s ‘Under Milk Wood’ with Bobby Wellins, to whom we wish a speedy recovery from his current illness. This was music of world class and more than confirmed ‘J in R’s’ commitment to bringing the best in contemporary jazz to the Reading stage. As one member of the audience remarked as he left the Progress auditorium, ‘I felt as if I was floating. I could have listened to that music all night’. Hear! Hear!