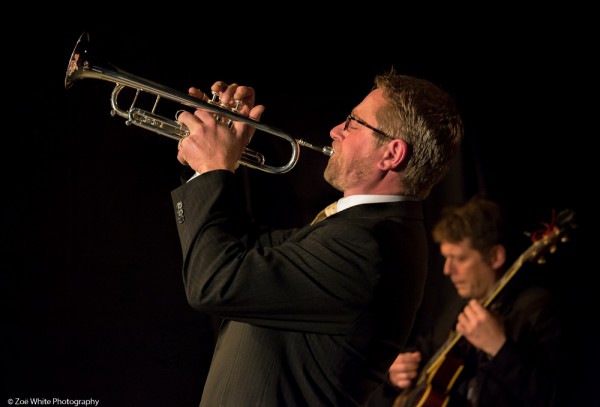 Gabriel Garrick’s Expansions Quintet. What to expect? Gabriel Garrick; trumpeter, son of the late and much lamented Michael, played with Shake Keane as a child, with the ‘Cuban Missile’ Arturo Sandoval as a teenager and jammed with Wynton Marsalis’ Lincoln Centre Band as a fully fledged musician. I look to the empty stage for more clues as I take my seat in the tiny auditorium of Reading’s Progress Theatre, once aptly described by a visiting musician as ‘a bijou theatrerette’. Keyboard, bass and drums. A guitar! No saxophone in the front line. A flugel-horn at the ready at the foot of the microphone centre stage, but no trumpet. Interesting …

Jim Wade, MC for the evening appears. The audience eagerly accepts his invitation to greet the band with a roof-lifting that will top anything they might ever have enjoyed at Ronnie Scott’s and we look to the back of the stage for the band’s appearance. Nothing. Instead a door opens to the side of the auditorium and we pick up the beat of Paul Cavaciuti’s tambourine and the first glorious strains of ‘The Saints’ from Garrick’s trumpet. In true New Orleans fashion, he leads his musicians, Nigel Price, Terry Collie and Dave Jones, in a march to the stage; instruments are taken up, and with drums and bass laying down an infectious beat, they breath new life into the old favourite. This is going to be an evening of jazz like no other – full of surprises and sheer audacity!

Who would have thought that juxtaposing a familiar ramble down ‘Basin Street’ with the mystical qualities of ‘Amethyst’, from Michael Garrick’s ‘Gemstone Suite’, so contrasting in style and form, could ever work. And yet it did; perfectly, providing a natural lead into ‘Speak Low’, Kurt Weill’s achingly beautiful composition, beloved of 1950s hardboppers. The band remained in reflective mood for ‘Dreamland’, a lesser-known (at least by this writer) Henry Mancini composition with evocative lyrics by Jay Livingston and Ray Evans which put the leader’s vocal mettle to the test. Briefly ‘refreshed’ from the water bottle, he picked up a cowbell to unleash a ‘Blakeyesque’ orgy of rhythm and excitement, with each member of the band adding to the fun, before launching into an explosive original ‘Tell Me Something New’ to bring the first set to a close.

Nigel Price got the second set off to an hilarious start when he quipped, ‘I’ll ‘Take Five’!’ in instant response to  Jim Wade’s announcement that tickets were selling out rapidly for the forthcoming concert by Darius Brubeck.

On a more sombre note, Garrick sadly informed us that Don Rendell, had passed away earlier in the week, aged eighty-nine. ‘Webster’s Mood’ (a Michael Garrick portrait of another tenor master), with Nigel Price being featured as once was Don, made a fitting and moving tribute to the great tenor saxophonist and pioneer of modern jazz in Britain.

Apart from the imaginative ebullience of Garrick’s leadership; he paces the stage good-humouredly, prompting with little trumpet interjections, or encouraging his colleagues with a nod of the head or sway of the shoulders, its strength as a group, in the true sense of the word, was amply demonstrated in another Garrick original, the intriguingly titled ‘Disinvited’. Wonderfully inventive solos from each member of the band, with challenging exchanges adding to the excitement of the piece, underpinned by Dave Jones’ beautiful bass lines and the driving, but never over-powering percussion of Paul Cavaciuti. What’s more, Nigel Price’s full bodied guitar gives the band the powerful feel of a much larger unit.

Terry Collie’s impeccable taste was never more in evidence than on ‘Swallows On The Water’, the third title from the pen of Michael Garrick and a homage to Joe Harriott, who used that phrase to describe how he felt on the occasion he played with Dizzy Gillespie.

Another pause for breathe, before Garrick took up the maracas to set up a funky-groove for ‘Walzkin’ with Jovis’ (Jovis being the name of both Garrick’s black labrador and the imprint of his record label). It would have made the perfect show-stopping conclusion to the gig, but there were more surprises to come. ‘Way Down Yonder In New Orleans ’, complete with vocal, provided a warm-hearted backward glance to the music’s origins. We moved forward to ‘Indiana’, before a touch of Charlie Parker’s ‘alchemy’ transformed this gently-paced standard into the blistering ‘Donna Lee’, with Garrick’s trumpet and the guitar of Nigel Price negotiating the unison passages magnificently.

‘I’m just getting warmed up,’ Garrick announced as he brought the gig to a close precisely at 10 o’clock. ‘’The body’s knackered, but the brain is coming alive… Can we play one more?’ he asked in deference to the neighbours who insist that the theatre closes on time. With permission duly granted, the band launched into Thelonius Monk’s ‘Rhythm-A-Ning’ to bring a memorable evening and joyous celebration of the ‘jazz tradition’ to an end.

‘I think they might have got something here,’ Jim Wade remarked in his closing words. How true! Brilliant musicianship, and a rich and varied programme, which set the audience buzzing with good spirit as it left the theatre; Gabriel Garrick’s Expansions Quintet is, as they used to say in the old days, ‘a band to watch for the future!’