Nat Steele MJQ Quartet: A Portrait of the MJQ – November 2022 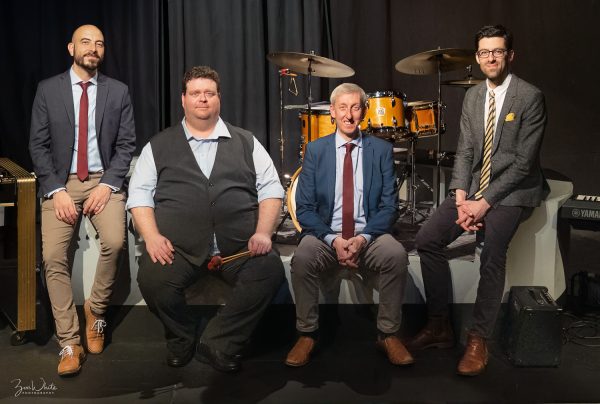 Nat Steele — graduate of Berkshire Young Musicians Trust (now Berkshire Maestros), Reading Youth Orchestra and Reading Youth Choir, who trod the boards of the Progress Theatre as a teenage member of the Progress Youth Theatre and who last appeared on its stage in 2013 with saxophonist Alison Neale — made a triumphant return to his home town on Friday 25 November with his MJQ Quartet to present a captivating ‘Portrait of the MJQ’.

Formed in 1952 by three erstwhile members of the Dizzy Gillespie Big Band – Milt Jackson vibes, John Lewis piano and drummer Kenny Clarke, plus bassist Percy Heath – the Modern Jazz Quartet took modern jazz in a new direction with a unique ensemble sound combining classical formality with jazz fire tinged with a deep feeling for the blues. Under John Lewis’s single-minded tutelage as Musical Director the group achieved outstanding levels of interplay that both excited and confounded audiences and critics. Simply put, they couldn’t distinguish between which parts were arranged and which were improvised. A quality that seems all the more astonishing when one considers a statement by Kenny Clarke to the effect that in the quartet’s early days neither Jackson nor Heath could read music! But boy, did they rehearse!

With only one change in personnel, when Connie Kay took over the drum chair in 1955, the MJQ became one of the most successful and enduring units of twentieth century jazz with a vast legacy of great music now captured in form, spirit, impeccable musicianship and incredible swing by Nat Steele and his richly talented quartet.

With its emphasis firmly placed on straight-ahead swing, Dizzy Gillespie’s exhilarating ‘Woody n’ You’ opened the concert as a tribute to the MJQ’s bebop roots in the Gillespie Big Band of the immediate post-war years. Jackson, Lewis and Clarke plus bassist Ray Brown played as a ‘band-within-band’ to provide the horn players with some relief from the ferocious ‘lip searing’ charts that Dizzy liked to play.  The quartet even played some gigs in its own right at Smalls Paradise, in Harlem under the banner of ‘The Atomics of Modern Music’.

Dario Di Lecce and Steve Brown combined forces to recreate the dramatic introduction to John Lewis’s arrangement of Jerome Kern’s, ‘All the Things You Are’.  Steele and Latchin followed up by playing the theme in unison before launching into their own free flowing solos, each expressing the tenderness and warmth of this classic standard. The circle complete, we returned to Di Leece’s fleet fingered bass, interspersed with the irregular interjections of Steve Brown’s drum accents. Brilliant!

John Lewis devised ‘The La Ronde Suite’, based on composition he originally titled ‘Bright Lights’ and which was subsequently adopted by Dizzy Gillespie as the more familiar ‘Two Bass Hit’, to showcase each member of the MJQ in turn. As a recording, it occupied two-sides of a 7” EP (hands up if you can remember those!) On this occasion it offered an insightful contrast between the four protagonists as they each interpreted the theme in their own way – Nat Steele’s joyful and spritely swing, Gabriel Latchin’s slightly darker and more reflective musings, the stately grandeur of Dario Di Lecce’s bass and finally the explosive excitement and rhythmic invention which Steve Brown so brilliantly combines with good taste and restraint. The Suite is surprisingly short but marvellously effective. It’s also great fun and closed with loud applause from the near-capacity audience and smiles all round from the band.

‘I’ll Remember April’ shot from the starting gates like a champion greyhound. Needless to say, the tricky switches in time from Latin to straight 4/4 were negotiated with perfect aplomb and the number raced along with everyone contributing to the chase.

Vernon Duke’s gorgeous ballad ‘Autumn in New York’ gave everyone a chance to recover their breath. Evocatively mellow solos from Nat Steele and Gabriel Latchin conjured images of bright sunshine illuminating the autumn leaves of Central Park. As with so many aspects of the MJQ, a single chime on the humble triangle added the finishing touch to a beautifully conceived arrangement.

While John Lewis was undoubtedly the driving force behind the MJQ, the jazz spirit was fuelled by ‘The Wizard of the Vibes’ Milt Jackson. His justly famous composition ‘Bluesology’ not only rounded off the First Set, but encapsulated Milt’s free-wheeling approach to jazz which influenced an entire generation of vibes players, including of course, Nat Steele.

Just as ‘Woody n’ You’ provided a backward glance to John Lewis’s role in the frantic days of the bebop revolution, ‘Rouge’ paid tribute to his contribution as both a pianist and arranger to the Miles Davis influential ‘Birth of the Cool’ recordings of 1949. Featuring the sparkling piano of Gabriel Latchin and a solo of great warmth by Nat Steele, ‘Rouge’ proved to be a very welcome addition to the Quartet’s repertoire. ‘It might have seemed simple,’ admitted Steele, ‘but it’s actually incredibly difficult to play.’

‘’Round Midnight’, with the bridge ‘borrowed’ from Wes Montgomery, was a second addition to the repertoire and all the more welcome for being so rarely heard in a live performance. The quartet captured the mood of the Thelonious Monk masterpiece to perfection.

As I mentioned earlier, listening to the MJQ always poses the conundrum of which parts are improvised and which parts are not. This proved to be a particular problem for the French critic and writer Charles Delaunay when he first encountered the group in its early days; “Is this a jazz group trying to be classical?” he puzzled. “Or is it a classical group trying to play jazz?” John Lewis summed up the situation nicely with the delightful good humour of ‘Delaunay’s Dilemma’.

The fragile beauty of ‘Milano’ reflected John Lewis’s fascination for all things European, while his obsession with J. S. Bach bore full fruit in the introduction and coda to ‘Softly as in a Morning Sunrise’.

This brought us to the penultimate number of the evening, John Lewis’s classic composition, ‘Django’; a flawless emotional and musical balance between the grief expressed for the loss of Django Reinhardt and a celebration of the exuberance and life-enhancing spirit that he brought to the world through his colourful musical career. Magnificent!

The two one-hour sets had passed in a trance. It remained only for the quartet to bow out on what else but ‘Bags Groove’ – a final dedication to Milt Jackson.

In common with so many projects, COVID brought a halt to the touring momentum of Nat Steele’s MJQ Quartet. We are delighted that they are back on the road. Unlike the MJQ, who played in po-faced severity on the one occasion when I saw the band way back in the 1960s, these guys looked to be really enjoying themselves. They clearly relish the opportunity to play together. The fact that Gabriel Latchin drove to the gig from his home in Glasgow and Dario Di Lecce flew in from Valencia, Spain speaks for itself!!!

What’s more, any group of musicians who ‘adapt and overcome’ to the challenge of making use of a massive riser that occupied much of the Progress stage with such imagination and good humour has my vote for the Band of The Year! Indeed, it could have been ‘meant to be’. Nat commented, “We’ve been asking for a riser for seven years and at last we’ve got one, even if it was intended to depict a prison cell.”

And finally, thanks are due to Rich Saunders who works his sound and lighting magic in solitary confinement at the back of the Progress auditorium and to Stuart McCubbin and his Front of House team who look after everybody’s safety and comfort with such care.