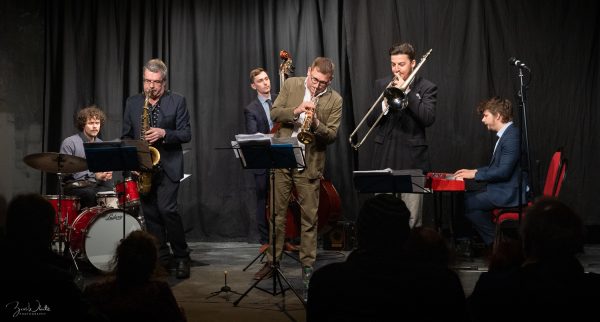 The late and much-lamented Art Blakey was well known (infamous some might say) for taking advantage of any situation to spread the ‘Word’ of Jazz. On one occasion we are led to believe, he took to his feet when a momentary silence occurred during a funeral service and said, ‘If there are no more tributes to be paid to our dearly departed brother, I should like to say a word about jazz.’

A professional musician in his teenage years and a bandleader from the 1940s until his death in 1990 aged seventy-one, Art embodied the attributes of driving swing and blues/gospel-soaked virtuosity that came to be known as ‘Hard Bop’. His ‘Jazz Messengers’ became a forcing ground for the most talented young musicians of the time. It was also a platform for the writing skills of such people as Benny Golson, Wayne Shorter and Freddie Hubbard. The Messengers toured relentlessly across the world, appearing at concerts, clubs and festivals and recorded extensively, attracting an audience way beyond the boundaries of most jazz artists – his records played on jukeboxes in the 1950s and the ‘club scene’ of the 1980s. In short, Art was an unrivalled phenomenon whose appeal remains as strong as ever.

Now perched on his ‘celestial’ drum stool Art would surely have smiled and nodded approval as the members of Wakey Blakey with the Rory Ingham/James Davison/Rory Ingham Sextet took to the stage of Reading’s Progress Theatre on Friday 8 April. His ‘message’ had arrived safely in the hearts and minds of a new generation of musicians; they did not let him down. Fuelled by the enthusiasm of a near-capacity audience in the tiny Progress auditorium, the band lifted the roof in their tribute to Art and his classic Sextet of the early 1960s – Freddie Hubbard trumpet, Curtis Fuller trombone, Wayne Shorter tenor saxophone, Cedar Walton piano, first Jymie Merritt and later Reggie Workman on bass and the inimitable Art Blakey on drums.

In the true spirit of the Jazz Messengers, Wakey Blakey comprises some of the brightest young talents on the current scene, seasoned on this occasion by the wonderful Mark Lockheart on tenor saxophone, whose wealth of experience embraces Loose Tubes, Polar Bear and more recently, the innovative ‘Days on Earth’ project. ‘Partners in Crime’ since their student days together at the Royal College of Music and NYJO (National Youth Jazz Orchestra), Wakey Blakey is co-led by the ebullient and sartorially elegant trombonist Rory Ingham*, who takes care of on-stage duties, and the brilliant award-winning trumpeter James Davison, who undertook the massive task of faithfully transcribing the Sextet arrangements from the original Riverside and Blue Note albums. A ‘heavyweight’ rhythm section of Will Barry on piano, Adam King on bass and drummer Felix Ambach, who had flown in from Germany especially for the gig, completed the formidable line-up.

There could have been no better choice of opening number than Wayne Shorter’s muscular blues ‘‘One by One.’ The band instantly hit a groove and set the seal for the evening with an ensemble sound guaranteed to lift the ‘hairs-on-the-back-your-neck’, a deep feeling for the music, incredible musicianship, solos of astonishing audacity and technical skill and a determination that everyone, onstage and in the audience, was going to have a ‘good time’.

Felix Ambach set the pace on Freddie Hubbard’s fast burning ‘Thermo’. Tightly arranged and swinging like the clappers, it offered a pleasing contrast between the burnished brass of Davison and Ingham and the more ethereal spaciousness of Mark Lockheart’s tenor saxophone.

The Jazz Messengers were rightly known for their full-blooded, straight ahead approach to music, but Wayne Shorter’s ‘This Is for Albert’ introduced a very different quality to the repertoire. Mark Lockheart produced an extended solo of exceptional beauty over the richly textured support of the rhythm section, a trance-like mood sustained by Felix Ambach’s reflective drum solo. One couldn’t help wondering whether this was an elegy for the loss of a dear friend? If so, who might Albert have been?

‘Free For All’ opened the second set to reveal yet another aspect of Wayne Shorter’s fertile imagination; the space he provides for musicians to freely explore the music as individuals as well as in various other subtle instrumental combinations. An absolute delight!

Written as an expression of Freddie Hubbard’s feelings towards the Civil Rights issues facing America in the early 1960s, ‘The Core’, with its distinct ‘Spanish Tinge’, is a declamatory piece with a universal message, even more meaningful in our world today than sixty years ago. Will Barry’s elegant and emotionally charged solo inspired a rousing cheer from the audience!

Barry is indeed a versatile master of the keyboard. He led the way safely through Freddie Hubbard’s labyrinthine ‘Crisis’ in company with the gorgeous bass of Adam King and Felix Ambach’s floating percussion, his notes lingering in the air long after the climactic front-line explosion had faded away.

With the clock counting down the minutes to the 10 o’clock ‘closing time’ we reached the finale, a no-holds-barred Freddie Hubbard blues ‘Down Under’. Notwithstanding the collective efforts of the entire band, this number truly belonged to the principal protagonists James Davison and Rory Ingham. Two very different personalities, but what a team they make and how they love to play, pushing each other to the limit – and beyond – as if competing in a good old-fashioned albeit good natured, cutting contest. No wonder the number, with its roaring out-chorus, brought the audience to its feet amid fervent cries for “MORE!”

“Why waste something we’ve carefully rehearsed?” responded Ingham as he counted in the second finale, Wayne Shorter’s ‘On the Ginza’ to bring the evening to a dazzling and breathless close. WOW!

Art Blakey’s message is in safe hands. Wakey Blakey should be prescribed by the NHS as a tonic for all ailments affecting humankind.

PS The band loved the intimate atmosphere and the great acoustics – thank you Progress!

* Rory Ingham writes, “Interestingly, my dad (Jazz Educator Richard Ingham) taught Jim (James) on a course in Scotland when he was a very young kid. So when we finally met it was a joy!”