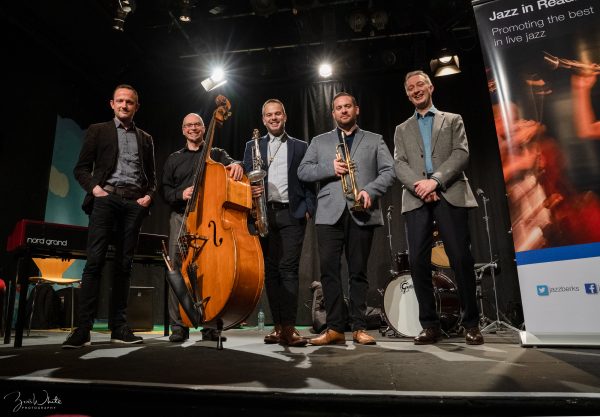 Dexter Gordon, who died in 1989 aged sixty-six, was a true colossus of 6’ 6”, whose stature as a tenor saxophonist and composer matched his massive frame; a sharp sense of outfitting, a smart choice of hats and an engaging personality completed his persona as the ‘cool hipster’ captured in so many atmospheric monochrome photographs throughout his five-decade-long career.

He began as a sideman in the big bands of Lionel Hampton, Louis Armstrong, Fletcher Henderson and Billy Eckstine, from which he emerged as an important and influential soloist in the Bebop revolution of the late-1940s. Sadly, this early promise was decimated by narcotics and Dexter spent most of the 1950s in various ‘places of correction’.

The 1960s saw his renaissance and a return to the recording studio for the Blue Note and Prestige labels. After a London date at Ronnie Scott’s in 1962 he made his home in Europe for the next fourteen years, which included a fruitful residency at the ‘Montmartre Jazzhus’ in Copenhagen, where he found a peace and respect denied to him in his native country. In his latter years Dexter earned an Oscar nomination for his leading acting role in Bertrand Tavernier’s 1986 movie Round Midnight.

Based on pianist Bud Powell’s expatriate life in Paris, it also closely mirrored Dexter’s own experiences of living in Europe. He returned to the US in 1976 and died in Philadelphia on 25th April 1990 leaving an indelible impression on those fortunate enough to hear him play in person and countless more who discovered his music from his vast legacy recordings.

Vasilis Xenopoulos was one such young musician who fell under Dexter’s spell, saving his hard-earned pocket money to buy the precious albums that would influence his playing and one day find an outlet in the Dexterity Quintet which lifted the roof of Reading’s Progress Theatre on Friday 28 January.

The tightly arranged exuberance of ‘Evergreenish’, from the 1970 Prestige album ‘The Jumpin’ Blues’, set the pace and the style for the evening; long, flowing solos of dazzling brilliance propelled by the straight-ahead, unfussy swing of the rhythm section. Neither Ross Stanley nor drummer Matt Fishwick give very much away by way of facial expressions, but the obvious enjoyment of playing in such a band, spurred on by the enthusiastic support of the audience was clear to see on Simon Thorpe’s smiling face.

Dexter acquired the sobriquet ‘Society Red’ as a seventeen-year-old member of the Lionel Hampton band and had he ever completed his autobiography it would have borne the title, ‘The Saga of Society Red’.  Instead, it was immortalised on the 1961 Blue Note album ‘Doin’ Allright’.

Vasilis’s introduction to ‘Montmartre’ prompted an hilarious cautionary tale of his once taking a ‘comfort break’ at a jazz club only to be assailed by a zealous jazz ‘anorak’. He insisted that Vasilis had incorrectly attributed  the ‘Montmartre Jazzhus’, Copenhagen as the inspiration for Dexter’s tune rather than the more famous artists’ district of Paris, where Dexter had also lived for a while during his European sojourn. Vasilis’s riposte that he had visited the Jazzhus in person and that the walls covered with photographs of Dexter told a different story, fell on stony ground.

The number itself, first recorded at the ‘Jazzhus’ for the Steeplechase label in 1964, leapt into life as an up-tempo Latin swinger. Apart from the breathtaking solos from the Xenopoulos/Collins front-line, it featured the cascading piano of Ross Stanley and the dynamic drums of Matt Fishwick.

Jazz musicians have the knack of finding nuggets of gold from the most obscure of sources – in this case the Sammy Khan/Jule Styne collaboration ‘I Guess I’ll Hang my Tears Out to Dry’ which Dexter rescued from obscurity on his 1964 Blue Note album ‘Go’. With Quentin Collins switching to the mellow toned flugelhorn, Vasilis at his most sumptuous on tenor, and underpinned by Simon Thorpe’s singing bass, this proved to be an object lesson in the art of ballad playing. Vasilis’ a cappella coda was something to die for.

With the audience on the tips of their toes straining to catch the random quotes thrown out by Vasilis’ eloquent tenor, ‘It’s You or No One’, another Khan/Styne collaboration, closed the first half in a joyous manner with a full-throttle nod towards Dexter’s ‘Montmartre Jazzhus’ recording of 1964.

The second set opened with ‘Dexterology’, a showcase for Vasilis’s own considerable writing talents, followed by ‘Tivoli’, a delightful jazz-waltz that captured the unique atmosphere and brightly lit gaiety I fondly recall from an evening spent long-ago in the Copenhagen pleasure gardens. The number appears on the last album released under Dexter’s name, ‘The Other side of Midnight’.

The next number didn’t really need an introduction – the title says it all – ‘Hanky Panky’, a cheeky, shuffly blues-march from Dexter’s 1965 Blue Note ‘Clubhouse’ album.  A wonderful feeling of tension-and-release between the respective solos, added an edge of nervy excitement to the fun.

Vasilis’ gorgeous interpretation of  ‘If You Could See Me Now’, originally penned by Dexter’s near-contemporary, pianist/arranger/composer Tadd Dameron for vocalist Sarah Vaughan way back in 1946, stood out as perhaps the highlight of the evening. Supported by the deft touch of Ross Stanley’s accompaniment – what an accomplished musician he is, and the sensitive backing of Simon Thorpe and Matt Fishwick, Vasilis absolutely commanded the stage and held the audience spellbound. Only one word would suffice to describe the performance – ‘Majestic’.

The no-holds-barred flag-waver ‘Second Balcony Jump’, a Billy Eckstine composition dating back to Dexter’s earliest days, brought an exhilarating evening and a fitting tribute to a legend of the music to a spectacular close. A grand finale indeed – wailing tenor, soaring trumpet, rolling piano, and explosive drums, topped by a gladiatorial exchange of ‘fours’ to keep everyone on their toes to the very last note – and all held perfectly in place by the pulse of Simon Thorpe’s rich toned bass. And, I should add, achieved without the aid of any amplification! Brilliant!

Vasilis should, of course, have appeared at Progress with his Dexterity Quintet in the spring of 2021. There is no need to explain why that didn’t happen.  All I can say, is that it was worth the wait and that  we wish him continued success with the band and album: Dexterity: The music of Dexter Gordon

Promoters please note – this is a band not to be missed!

As ever, thanks to the House team for the excellence of hospitality, smooth running of the evening and superb sound and lighting. And last, though by no means least, thanks to the wonderful audience whose support ensures that jazz remains ‘live’ on the stage of the Progress Theatre.