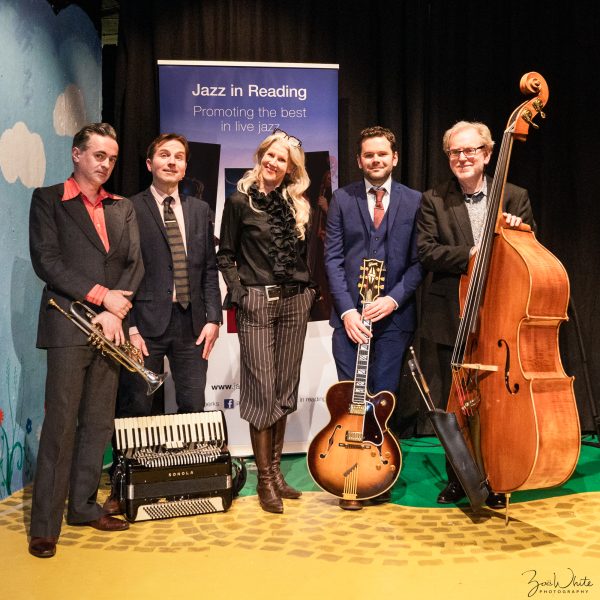 Judging by the reception given to Katya Gorrie and her four partners in song-and-tune, by the near full-house audience at Reading’s Progress Theatre on Friday 17 December, I am not alone in being a great fan of the Moscow Drug Club. No matter that the entire concept is a fantasy drawn from the deliciously decadent lyrics concocted by B.B. Gabor, an émigré Hungarian songwriter who settled in Canada. I like to indulge in the illusion that Katya really did meet up with her dissolute bunch of minstrels in rehab after suffering the effects of a night at ‘The Moscow Drug Club’ – a place where members ‘could have a smoke’, cock-a-snoop at authority, relax in the musical intimacy of its intoxicating atmosphere and ‘where the Reds played the blues’. Can you think of any better antidote to the ravages of COVID and endless disclosures of political sleaze?

Best of all, I love the honesty of the Moscow Drug Club. When they play for fun, they go for it full-heartedly, setting the pulse racing and the toes tapping; they deflate pomposity with a twinkle of the eye and when life is S…, they tell the story exactly as it is. And by doing so, they introduce us to a wonderful melange of songs, imbued with both the theatricality of Katya Gorrie that has been part of her life from earliest childhood in Canada and the brilliant musicianship of Messrs Bruce, Salmon, Bowen and Crowdy.

‘It Had Better Be Tonight (Meglio Stasera)’, a lively samba composed by Henry Mancini with lyrics by Johnny Mercer and a featured number in ‘The Pink Panther’ movie, set the evening off to an exuberant start. Aided and abetted by Jonny Bruce’s full use of his plunger mute and the ‘deep throated’ accordion of Mirek Salmon, the cynical lyrics of Eartha Kitt’s ‘Pink Schmink’, presented a very different picture of love. When the final verse posed the question, ‘What have you got if you haven’t got love?’ ‘I’ll take the Jaguar on the right!’ came the reply.

Like Eartha Kitt there was very much more to Norma Deloris Egstrom than ever revealed by her glamorous alter ego ‘Miss Peggy Lee’. She was a song writer of rare quality as ‘‘The Gypsy with the Fire in His Shoes’ firmly testified. It blazed with the excitement of the bull ring and the rhythms of flamenco. Olé!

Katya sent the mind boggling when she introduced the next piece, a co-composition with Mirek Salmon, as being a ‘Rudyard Kipling outing for adults’? True to her word, ‘Serpentine’ was indeed an atmospheric exploration of seductive sensuality, enhanced by the closely mic’d Miles Davis-ish trumpet solo by Jonny Bruce.

‘When I Get Low, I Get High’, a hit song for improbably named Marion Sunshine, turned the clock back to the sheer joy, flamboyance and razzmatazz of 1920’s vaudeville, with Katya accompanied by the tuneful voices of her male backing quartet.

Mirek Salmon’s melancholic accordion set the scene for Jacques Brel’s ‘The Port of Amsterdam’, a song that made an indelible impression on Katya’s imagination when she first came across it as a child amongst her parents’ eclectic collection of records. It developed in a kaleidoscopic sort of way to capture Brel’s vision of the sights, sounds and people of the port. Brilliant.

The final two numbers of the first set could not have presented a greater contrast. Swapping his double bass for a guitar, Andy Crowdy joined Andy Bowen in, what else but Charles Aznavour’s pulsating ‘Two Guitars’. Having it hit the heights of inspired invention, we immediately descended into the dark territory inhabited by ‘A Jockey Full of Bourbon’, Tom Waits’ elegy for a drunken taxi driver and the series of mishaps that behalf him. Katya expressed the bleak narrative brilliantly. Jonny Bunce’s concluding statement on the trumpet lifted the roof, but it couldn’t lift the feeling of waste and despair engendered by the song.

The second set opened with ‘Miserlou’, a traditional Turkish song, which found a surprising new lease of life as a ‘surfing’ hit for Dick Dale in the early 1960s, later featured on the soundtrack to ‘Pulp Fiction’. Thankfully, the MDC interpretation retained all the mysterious spirit and rich eastern Mediterranean flavours of the original.

The gentle ‘Just Squeeze Me (But Please Don’t Tease Me)’, provided the opportunity for a welcome reprise of the vocal charms of Katya and her boys, who then cut-loose with a full-bodied tribute to Louis Armstrong in the fateful tale of ‘Ole Man Mose’. As Jonny Bruce’s trumpet dazzling trumpet notes ascended to the heavens, we were reminded that even fifty years after his death, Louis’s influence is as strong as ever!

The brilliant solo guitar of Andy Bowen lightened the moody darkness of Tom Waits’ ‘Temptation’ before his compatriot in the rhythm department, Andy Crowdy, took centre stage. Not only did his bass hit a great groove to ‘bookend’ Jacques Brels’s classic ‘Jacky’, but he displayed his talents to their full glory in a technically impressive and wittily conceived solo. I picked out quotes from ‘We Three Kings’ and ‘Silent Night’ and feel sure that even more escaped my attention. Great fun!

The flute-like notes of Mirek Salmon’s accordion added a special dimension to Leonard Cohn’s ‘Dance Me to the End of Love’ and confirmed once again that in his hands it is a beautifully expressive instrument and a perfect accompaniment to Katya Gorrie’s voice.

All too soon, the moment arrived to call time on the Moscow Drug Club, but not before Katya and the band paid tribute to B.B. Gabor and the song which inspired its creation, ‘Moscow Drug Club’ – the curious and only place where ‘the Red’s play the Blues’ and where it’s possible to rub shoulders and share a drink with the varied company of Tom Waits, Louis Armstrong, Marion Sunshine, Leonard Cohen, Eartha Kitt, Duke Ellington, Jacques Brel and Miss Peggy Lee.

Our thanks to ‘sound wizard’ Rich and the Progress Front of House Team.

May I wish you all a safe and ‘swinging’ Christmas, as we look forward to the promise of some more great gigs at Progress in the New Year.