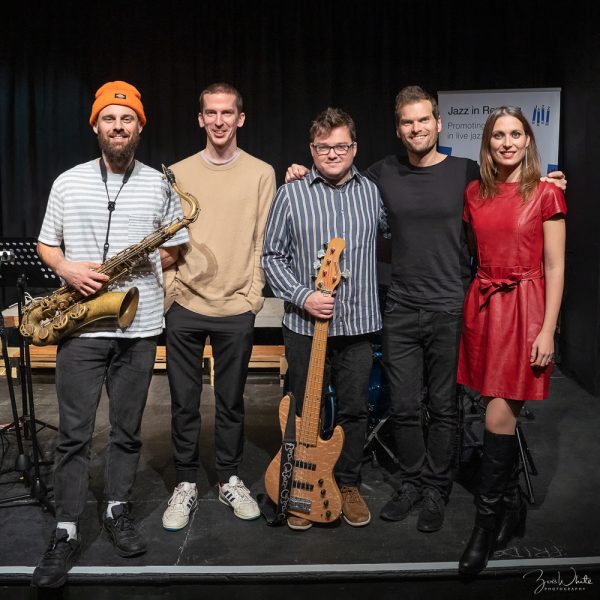 Sometimes you hear a sound of such originality, energy and stunning beauty that it quite simply ‘Knocks you out.’ The opening night of the new Jazz at Progress season on Friday 22 October bore witness to such an occasion. The musicians who comprise Graviton, a five-piece band, led by Andrew McCormack, held a near capacity audience spellbound for a magical two-hour performance of ‘The Calling.’

Fusing influences from a variety of musical genres, McCormack writes on a grand scale to fulfil his epic vision of eight pieces tracing the journey of the archetypal ‘hero’ in the pursuit and eventual destruction of the ‘dragon.’ It hardly seemed credible that music of such depth of sound and richly textured complexity could emanate from a mere five players; five musicians I should add, who were playing together for the first time in almost two years.

But nothing could have prepared my senses for the beauty and exhilarating effect of Noemi Nuti’s crystal-clear vocal tones. She takes the art of using the voice, both as an improvising instrument within the ensemble, and as a soloist, to new levels of possibility. Amazing!

‘Breathe’, ‘The Calling’ and ‘The Walled Garden’ simply swept me along in a fervent tide of sound and rhythm. I scarcely noticed the interludes between each piece. In no time, we arrived in the company of the ‘The Magic Mentor’.  As McCormack explained, ‘Everyone needs a guiding light of inspiration in their life.’ In his case, it was and remains, the towering influence of the great saxophonist Jean Toussaint, to whom this beautifully reflective piece was dedicated.

In complete contrast, ‘The King is Blind’ expressed a protest against the dark forces of tyranny that can only be likened to a primeval scream, such was its intensity. Driven forward by the power of Joshua Blackmore’s drumming and McCormack’s jagged phrasing at the keyboard, Josh Arcoleo delved into the depths of his soul to summon an astonishing solo of impassioned rage to bring the first set to a dramatic close.

Andrew McCormack took to the stage alone for the opening of the second set. Switching his keyboard to piano mode, he embarked on a lengthy exploration of his own composition, ‘Dreamcatcher’. Not only is he delight to listen to, but also a delight to watch – you can see ideas taking shape in his face, followed by a look of determined concentration as he sets out to express them in layer upon layer of brilliant free-flowing improvisation.

Josh Arcoleo, Conor Chaplin and Joshua Blackmore joined him for ‘Windows’ a heartfelt tribute to its composer, Chick Corea, the ‘giant of music’ who died earlier this year at the age of seventy-nine. The waltz-time arrangement remained faithful to Chick’s 1967 recording with the Stan Getz Quartet with the same sense of warmth and subtle rapport between the respective musicians that Is such a feature of the original.

The brilliantly conceived ‘Belly of the Whale’ released a wave of powerful emotions which reverberated throughout the Progress auditorium. It served as both a cry of anguish and despair and as a metaphor for those entombed within circumstances seemingly beyond hope.

The light of hope, however, can never be completely extinguished and emerged in the pure sound of ‘Andromeda’. The simple device of an electronic loop sustained a combination of Noemi Nuti’s voice and the single notes of a glockenspiel to compelling effect.

The ‘Dragon’, the grand climax to the epic saga of ‘The Calling’ finally brought us face-to-face with the source of all evil as personified in Joshua Blackmore’s drums. The accuracy and driving energy of his playing had been evident throughout the evening. Now he unleashed the full scale of his imagination and ferocious power in a solo of nail-biting excitement. For all that, the dragon’s destiny lay in defeat. ‘The Calling’ had turned full-circle and our ‘hero’s’ journey was complete.

The original scheduling of ‘The Calling’ at Progress fell victim to COVID-19 and the Lockdown. It’s enduring theme – the ‘hero’s journey’ and the strength of the human spirit, has assumed new depths of meaning in the intervening eighteen-months – it doesn’t take too much thought to picture the numerous ‘dragons’ which have emerged in recent time, or the ‘heroes’ who have sought to rescue us from such dark forces. For that reason, it made a fitting choice to open a new season of jazz at the Progress Theatre. But more importantly, it celebrated the return of ‘live’ music – great music. Welcome back, we’ve missed you!!!!!

Our thanks to the team at the Progress Theatre who ensured that neither the COVID safety restrictions nor unfinished renovations on the building got in the way of a thoroughly enjoyable evening. Our thanks also to a wonderful audience. Jazz at Progress is back on the road!

‘The Calling’ is available as an album on the Ubuntu label (UBU0025) and Andrew is hoping to tour with Graviton next year.