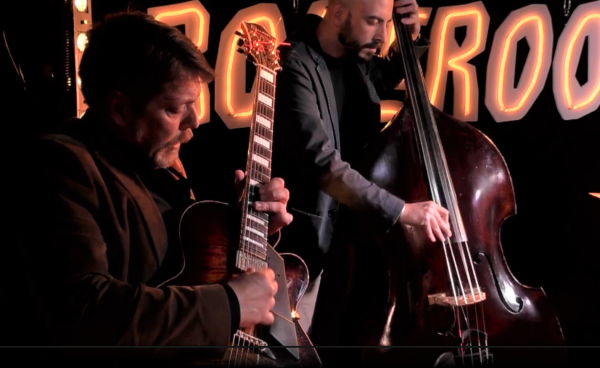 Livestream Jazz from the Boileroom, Guildford, Wednesday 5 May  2021
In collaboration with Guildford Jazz

As I have said on several previous occasions, the Livestream  gigs from the Boileroom, Guildford, each of outstanding quality, have truly been the next best thing to a live event. However, on this occasion one camera shot, incorporating both the stage and the auditorium, added a new dimension to the experience.

It brought home how tiny and how empty the Boileroom is. But for a single camera mounted on the floor there is nothing in front of the stage except space. Just imagine how difficult it must be for the musicians to play as if to a live audience without anyone actually being there. Do they conjure an image of a full house in their mind’s eye, I wonder or is it more a case of ‘Here we are guys? Let’s go for it!’

I suspect it’s the latter, for the opening bars of Kenny Burrell’s ‘Lyresto’, from a 1958 collaboration with John Coltrane, simply oozed with good spirit and the promise that fireworks would fly in a celebration of many great guitar/tenor partnerships from the past sixty years. The sharper edge of the Xenopoulos tenor blended perfectly in unison with the depth and glowing tone of the Price guitar and made for an exciting contrast throughout the solos.

It came as no surprise to learn that Dario Di Lecce named bass legend Paul Chambers as a major influence on his playing when he was interviewed during the Q & A session later in the evening. His walking bass line on ‘The Right Time’ was absolutely superb, as rich in tone as the hue of his beautiful instrument. It added an air of mystery to the original by British guitarist Dave Cliff recorded as the title track for an album with saxophonist Geoff Simkins in 1987.

The next offering was drawn from ‘What’s New’ the second of two albums Sonny Rollins recorded with Jim Hall in 1962. They reaffirmed Sonny’s status as a major innovator on his return to the New York scene after a self-imposed break of three years. Sonny had the intuition to find the ‘jazz spirit’ in the most unlikely show tunes and ‘If Ever I should Leave You’ from the Lerner and Loewe musical ‘Camelot’, a popular hit and signature tune for the singer Robert Goulet, was a perfect case in point. The XPQ interpretation was full of the majestic poise of Sonny Rollins and grace of Jim Hall, full of long inventive lines and with a dancing quality enhanced by the drums of Winston Clifford.

‘Full House’ unleashed the Boileroom theme (played, I now realise, over the screen credits that precede the livestreams) with a machine gun ferocity that brought ‘all hands-on deck’. The early 1960s were clearly fruitful years for guitar/tenor features – this Wes Montgomery title comes from a live album recorded with the ‘Little Giant’ of the tenor, Johnny Griffin for the Riverside label.

‘When Joanna Loved Me’, from the 1964 ‘Easy Living’ album, as one would perhaps expect from a collaboration between Jim Hall and Paul Desmond, was an altogether more gentle and lyrical offering.  Vasilis sustained the mood of gentle reflection set up by Price in his beautiful introduction, opening the way for a wonderful extended solo by Dario Di Lecce. Vasilis lifted the pace a little with a breathy solo that returned the tune to Nigel Price for a breath-taking coda.

Winston Clifford, a most sensitive and subtle percussion specialist, now set the ‘pots boiling’ and lifted everyone’s game on ‘Ready and Able’ from the appropriately named 1967 George Benson album, ‘The George Benson Cookbook’; performed,’ as Nigel Price pointed out, ‘Without the aid of a safety net! Wow!

‘On the Trail’, a movement from composer Ferde Grofé’s Grand Canyon Suite and the title track from a Jimmy Heath Riverside album with Kenny Burrell, rounded off the evening at a gentle saunter, conjuring visions of the wide-open American West – another tune from an unlikely source that works perfectly in a jazz setting.

In the absence of a live audience to cry out for more, Marianne Windham, stepped in to call for an encore. In time honoured tradition, the band checked their watches and ‘reluctantly’ agreed. The result?  Imagine the theme statements to ‘Straight No Chaser’ and ‘Billie’s Bounce’ played in succession at Formula 1 speed, followed by a third, hybrid – combining the themes of the first two – a sort of ‘bebop mix-and-match’. Chaotic, great fun, a dazzling conclusion to an outstanding evening of jazz and a prelude to what Winston Clifford declares is the ‘bright future’ for jazz and all live performance artists once we emerge fully from Lockdown. Hear! Hear!

As ever, our thanks to Marianne Windham of Guildford Jazz, Dom and Beth of the Boileroom and Steve from Ultimate Stream, for what is now a world-class presentation and to the various jazz societies and their friends who support this wonderful initiative.

A final note: check out the Parliamentary Awards for 2021 before the closing date of 14 May and cast your vote here for the Boileroom for the Jazz Innovation Award.