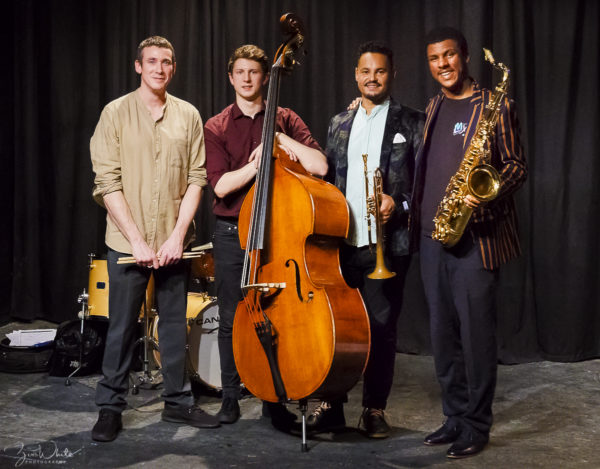 The full house generated a palpable sense of anticipation. Tickets for the first Progress gig of the year, and indeed, a new decade, had sold out a week in advance and on the night, we bore witness to that rare phenomenon, a queue waiting in vain at the box office for returns. Such was the interest in Xhosa Cole, 2018 BBC Young Jazz Musician of the Year, winner of the 2019 Parliamentary Jazz Award for Newcomer of the Year and a high scoring nominee in the 2019 British Jazz Awards and his appearance on the Reading leg of a national tour.

To our delight we soon discovered that Xhosa’s astonishing musical talents are matched by his ebullient spirits, engaging personality and sartorial elegance. Aided and abetted by the dazzling assurance of Jay Phelps on trumpet and the brilliant rhythm team of James Owston on bass and drummer Jim Bashford, he set the audience alight with a perfectly balanced programme, breathing fresh life into the genius of past creations undeservedly consigned, through either chance or changes in fashion, to the furthest recesses of the jazz vaults. How often do we hear titles from Woody Shaw, Fats Navarro, Dexter Gordon or Ben Webster, or even, for that matter, Thelonious Monk or Dizzy Gillespie? Add to the mix an original from James Owston and Cole’s own highly idiosyncratic arrangements of two standards and all the ingredients were in place for a great evening.

What’s more, the absence of a chordal instrument meant that there could be no hiding places in this band.  Needless to say, everyone stepped up to the mark and the band sparkled with the remarkable interplay between the respective musicians, an immediately impressive feature of the opening number ‘Moontrane’,  composed by the late and much lamented Woody Shaw and the title track on his third album recorded in 1974. The jubilant unison tones of Cole’s tenor and Phelps’ trumpet, over the clean-cut rhythms of Owston and Bashford, lifted the hairs-on-the-back-of one’s-neck. Rather than following the theme with a string of solos in the conventional manner, the band adopted a more conversational approach with the lead bouncing back and forth between the players. An array of interjections and subtle prompts kept the music in motion, and the musicians firmly on their toes as things headed-off in unexpected directions. To borrow a phrase from American writer Whitney Balliett, we were enthralled by ‘the sound of surprise’.

‘Moontrane’ segued seamlessly into the straight ahead swing of ‘Salute to the Bandbox’, another memorable Woody Shaw composition, underpinned by James Owston’s gorgeous walking bass.

Tragically, Woody Shaw’s light shone but briefly in the jazz firmament. The career of John Birks ‘Dizzy’ Gillespie, on the other hand, grew in stature over the course of seven decades from the ‘enfant-terrible’ pioneer of bebop to an elder statesman of jazz revered across the world. He loved exotic rhythms and surely would have taken delight in Jim Bashford’s irresistible drum conflagration that kept toes tapping and heads nodding throughout ‘And Then She Stopped’.  Pure magic!

Fats Navarro rivalled Gillespie as the ace bebop trumpeter of the late 1940s, but like Woody Shaw thirty years later, the ravages of drug addiction brought his life to an early close. Jay Phelps paid tribute to Fats with a beautiful interpretation of ‘Nostalgia’, a Savoy recording from 1947. Taken much more slowly than the original, and with the sensitive support of Owston and Bashford, Jay used his incredible range to draw every ounce of emotion from Navarro’s composition, leaving wistful thoughts of what might have been.

James Owston shared what Xhosa described as the ‘fun and games’ of the ‘Great British Bake Off’. In other words, he was also a finalist in the 2018 BBC Young Jazz Musician competition. And rightly so. He is a fine writer as well as brilliant bassist. His composition, ‘Deep Blue’ provided the launching pad for a wonderfully inventive flight of ‘free’ collective improvisation. Isn’t it amazing how today’s young musicians, not only express themselves with such breath-taking technical ability, but dip into all the genres of jazz music without batting an eye lid; a welcome far cry from the fiercely contested days of ‘Mouldy Fygges’ and ‘Modernists’. As if to affirm this openness of spirit, Xhosa rounded off the first set with ‘Cheesecake’, a nicely laid-back swinger from tenor giant Dexter Gordon recorded for Blue Note in 1962.

Jim Bashford’s parade ground drum rolls summoned the band back into action for the second set with a final offering from the pen of Woody Shaw – ‘Zalta’; an  exhilarating outing, bursting with rhythmic complexity before turning full circle to close on the gradually fading march-like figures of Bashford’s snare drum.

The show-tune ‘Manhattan’, the first hit for the song-writing team of Rodgers and Hart, instantly brings to mind the melodic splendour of the ‘Queen of Song’ Ella Fitzgerald.  Xhosa, on the other hand, chose a very different path in which to interpret the song; in paring it down to a bare skeleton he was perhaps closer to the sardonic sentiments of its lyrics than Ella’s celebrated recording. The ‘paradoxical beauty’ of  Thelonious Monk’s ‘Reflections’ offered a similar challenge, while shed of its Disney sentimentality ‘When You Wish Upon a Star’ emerged in a completely new light and an apt dedication to the plight of the homeless, whose cause, Xhosa is proud to espouse.

It hardly seems possible that 29th August 2020 will mark the centenary of Charlie Parker’s birth and that on 12th March sixty-five years will have passed since his death. He packed a lot of music and lots of largely self-destructive living into his all-too-short time on earth, but such was his genius that his legacy lives on with enduring power. The delightful ‘My Little Suede Shoes’, first recorded for Norman Granz in 1951, proved to a be a perfect tribute to Bird, expressing the wit and charming appeal of his personality all too often obscured by the ugly features of his life.

Ben Webster’s hard-swinging blues ‘Better Go’ rounded things off as the encore to an exhilarating evening. And should there be any naysayers who doubt the future of jazz, catch this band while you can on the remainder of its tour or at this summer’s Swanage Festival. You won’t be disappointed! We wish Xhosa every success for the future with the quartet and varied other projects and look forward to him soon cutting an album with this exciting band.

As ever, thanks to the Progress House Team for their warm hospitality and for the excellent quality of the sound and lighting.