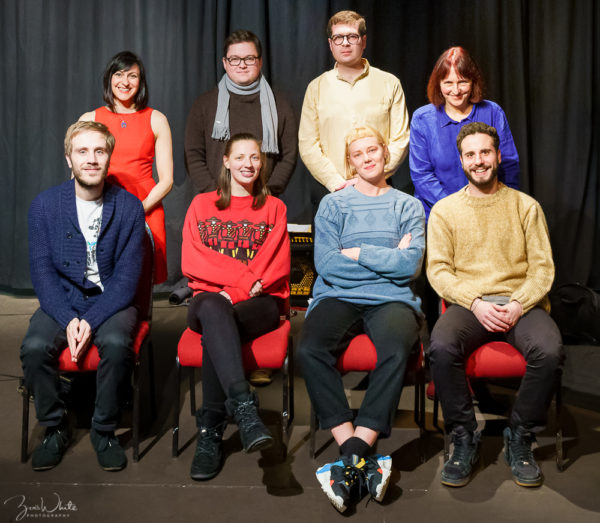 Let’s shout it from the rooftops, ‘Finding Home’, the fruit of a long-standing creative partnership between the kindred spirits of pianist/composer Kate Williams and vocalist/lyricist Georgia Mancio, is an absolute triumph. “We wanted to take a concept,” Mancio explained, “that deals with the brutal realities or our world and through a collection of songs, old and newly written, turn it into something positive.”   The alchemy of the performance at Reading’s Progress Theatre on Friday 6 March achieved exactly that: an affirmation of the inextinguishable light of the human spirit.

‘Finding Home’ tackles a theme of universal proportions with candour and sensitivity and succeeds magnificently in its appeal to the heart, the mind and the spirit.  One member of the audience spoke afterwards of how he relished the  atmosphere of peace and relaxation that the combination of instruments engendered: the perfect antidote to weeks of stressful activity at work. Another spoke of how “beautiful and moving” she found the performance and “how wonderful and refreshing to see women represented in jazz. And even better – leading the show.” Applause, I noted, was muted throughout the evening. Not for any lack of enthusiasm, but rather in respect for the performers and perhaps a fear that such exuberance might break the spell that held us all in its trance.  The emotional release came fittingly after the final number, when a storm of applause threatened to lift the roof off the Progress.

The superb acoustic of the theatre, enhanced with a minimum of amplification for Conor Chaplin’s bass and Georgia Mancio’s voice,  meant that we could hear each instrument with perfect clarity and a natural balance. What a joy to hear Kate Williams’ moonlight touch on a ‘real’ piano, and to sense the empathy between her trio members – the heartbeat of Chaplin’s bass and the uncluttered swing of David Ingamells’ percussion. And I thrilled to see the string section at work at such close quarters and to share their sense of repose in the passages when they were ‘laying out’ from Williams’ exquisite arrangements.

Georgia Mancio proved to be the ideal travelling companion as she led the journey to explore the illusive nature of ‘Finding Home’. The crystal-clear diction and the light, airy qualities of her voice which so impressed the Progress audience on a memorable evening four years ago, have grown in expressive maturity, while her remarkably subtle gifts as a lyricist lent themselves perfectly to the quest.

Lest anyone think that this was an evening of po-faced intensity, I should say that it began with a moment of confusion and great hilarity. The band mistook their entry cue and midway into his introduction, a surprised MC, Jim Wade, found himself surrounded on stage. ‘We should rename the band,’  he suggested.  ‘Kate Williams’s Four plus Three add one, meets Georgia Mancio.’

Georgia Mancio’s warm vocal tones and the comforting embrace of the strings plus trio provided the reassurance of a safe passage on the opening number ‘The Journey Home’, a beautiful composition and one of two written in a collaboration between Mancio and the American based/New Zealand born pianist Alan Broadbent and recorded on their ‘Songbook ‘album.

‘Moon and Sand’, once a hit in the 1940s for the ‘King of the Rhumba’ Xavier Cugat, presented a bitter/sweet reflection on the magic of love, a sentiment captured to perfection in Mancio’s whistled chorus which brought the tune to wistful close. Antonio Carlos Jobin’s ‘No More Blues’ (Chega de Saudade), reputedly the very first bossa nova,  sustained the mood of  gentle nostalgia and rumination. The highlights – Kate Williams’ coruscating piano and the propulsive organ-like string passage.

‘Tell the River’, also from the Mancio/Broadbent ‘Songbook’ explored the darker territory of the ‘real world’; how a chain of events following an alleged traffic violation inexorably combined and led to the death in police custody of  Sandra Bland, a young African-American  woman of  28, in Waller County, Texas in 2015.  Set against a bleak background, Mancio’s emotionally charged lyrics, dared to imagine how Bland’s  life, cut short in brutal circumstances, might have been.

By contrast, the instrumental excursion ‘Walking Up’, a Bill Evans composition from his 1962 album ‘How My Heart Sings’, simply oozed with good spirits, while ‘Finding Home’ achieved a remarkable sense of tranquility, enhanced by Marie Schreer’s wondrous violin solo. ‘One for the Bees’, an electrifying Williams/Mancio  composition, brought the first set to an electrifying close, a timely reminder of how these small creatures are essential to our world and wellbeing.

The intensely moving ‘Don’t Go to Strangers’ opened the second set with Georgia Mancio accompanied by Jenny Ames on viola, and Sergio Serra, the cello. There followed the most amazing monologue one could imagine; Mancio’s vivid description of a dream journey. It begins as a gentle morning walk in familiar territory, but quickly  assumes a different mantle –  one footstep follows another in endless repetition to where? No destination is ever in sight.  The import of what she is saying takes a while to sink in. Then the penny drops. We are listening to the voice of the multitude, those,  who for varied reasons, many way-beyond their control, deep, seek a new home and refuge far from the place where they were born – sometimes with family members, more often than not, alone.

This disquieting prelude led to the core of ‘Finding Home’; three songs by Williams/Mancio  – ‘The Last Boy on Earth’, ‘Halfway’ and ‘Walk’, brilliantly arranged and performed with heartbreaking authenticity, using the full resources of the lyrics and ensemble to depict the harrowing, yet awe-inspiring personal testimony of three child refugees.

‘How Deep is the Ocean’ followed, its lyrics affirming the enduring power of love in a way that Irving Berlin could never have envisaged. And so finally to ‘Play’, an elegy by Williams/Mancio for those loved ones we have lost – a fitting and beautiful ending to a unique and  unforgettable evening. WOW!

Readers may like to find out more about Safe Passage child refugee charity on www.safepassage.org.uk

As ever, thanks to the Progress House Team for their warm hospitality, the excellent quality of sound and lighting and for ensuring that the event ran so smoothly.