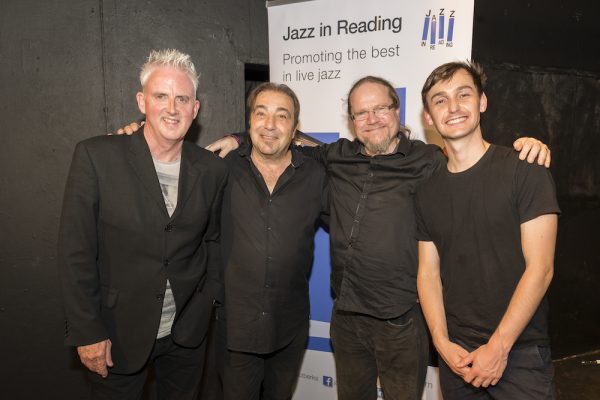 With a packed schedule of British dates, including a visit to a well-known Sussex coastal city, he suggested they might start with “I ‘Hove’ You” (Cole Porter’s “I Love You”), but in fact launched into an up-tempo “What is This Thing Called Love”. The dynamic alto solo included (among other quotes), a snatch of Dameron’s contrafact “Hot House” (a tune Greg has recorded more than once and clearly enjoys).

Switching to flute (apparently an advance request from a local flute player – sadly not able to attend – prompting  Greg to relate he often receives  requests for specific instruments in his portfolio from fans who then can’t be there) we next heard Joe Henderson’s popular bossa nova “Recorda-Me”, with sparkling solos from all the band.

Having already (musically) referenced Tadd Dameron, the band followed with his composition “Afternoon in Paris”, starting with a trio (alto, bass, drums), then joined by piano. Pianist Craig Milverton is often in demand to accompany visiting US musicians, as well as being busy with many of his own projects.

“Contemplation”, an Abate minor blues composition, again showed his versatility, and command of flute. Piano, bass, and drums solos followed. Drummer Nick Millward is said to have based his approach on Buddy Rich. As well as vocalist in his own band, Nick has a distinguished career with traditional bands including those of Kenny Ball Jr. and Terry Lightfoot. This evening he demonstrated his ability to play superbly in any genre.

Returning to alto, the second standard of the evening, “Moonlight in Vermont” began with an unaccompanied statement on saxophone, before the band joined. This composition, like several of the evening’s selections, is featured on Greg’s album Kindred Spirits with Phil Woods. This was a very rhythmic interpretation, the band moving into double time (and then double-double), with a thoughtful  bass solo from Adam King, 2015 Young Jazz Musician, he studied at Middlesex University, and cites Jaco Pistorius as his inspiration for switching to bass from his first choice, alto saxophone.

The first set closed with a fast version of “Star Eyes”, a favourite with jazz soloists since the bop era. After solos the band moved on to 8 bar exchanges. Before closing the set, the Progress audience were intrigued with what may be a Greg Abate trademark: short musical ‘duets’ or ‘conversations’ with each of the trio, where Greg played a short phrase, and the other ‘replied’.

After the break (during which Greg continued the relaxed feeling of the evening, by freely chatting with audience members in the lounge), the band went to a fast “Yardbird Suite”.

At a contrasting tempo, the second ballad of the evening, “In a Sentimental Mood” again presented Greg’s alto in an expressive interpretation, deploying varied articulations, dynamics, and the full range of the instrument. Craig Milverton took the middle eight on the opening theme, unhurried and with occasional ‘outside’ harmonic colour.

Another standard, reminiscent of the Charlie Parker repertoire, “I’ll Remember April” followed, in a very fast reading. Alternating latin and swing rhythms were enhanced by the fine drumming of Nick Millward.

The last flute feature of the concert, “Lullaby of Birdland” was taken at a steady tempo, but with plenty of fluent double time in the flute solo. Craig’s piano solo included some ‘locked hands’ chordal playing (a nod to the composer’s style?), before a bass improvisation with Craig inserting a “walking bass line” on piano.

After selections from some of the most celebrated jazz composers, what could be more apt than Monk’s “`Round Midnight”?  Quotes, they say, are a neglected feature of the improviser’s skill; a reference to the preceding theme in the alto solo illustrated this nicely.

Leaving the audience wanting more, the band finished on a high note (altissimo C on alto?) and at breakneck speed: “Donna Lee”,  conventionally taken at a fast tempo, but here at a lick that defeated one audience member’s new BPM (beats per minute) app designed to pick up the metronome marking!

Sincere thanks to Greg Abate and all the Craig Milverton trio for a superb evening, and, as ever, to the Progress Theatre people, Hickies of Reading for the piano, and all the Jazz in Reading team.