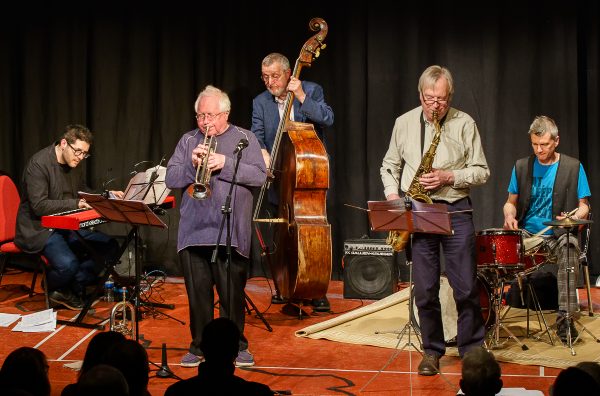 ‘National treasures’ seems to be a rather twee epithet to describe two musicians who’ve each graced the rough and tumble of the professional jazz scene for the past fifty-plus years, but I can’t think of anything else more suitable or more deserving. Henry Lowther and Dave Green are NATIONAL TREASURES. The fact that they are back together and touring with Still Waters after an interval of twenty years, is not only to be celebrated but should be shouted from the roof tops.

The evening opened with ‘Can’t Believe, Won’t Believe’, the title track of the band’s latest album; a reflection on the scepticism of our present times and a challenge to any listeners who might doubt that the lyrical beauty of Lowther’s composition could fit so perfectly with the turbulent drumming of Paul Clarvis  One might have expected gentle brushwork and subdued cymbals. Not so! The ever-shifting rhythmic patterns and rich variety of sounds he drew from his minimalist kit emphasized that the emotional undercurrents of still waters do indeed run deep.

The Latin-tinged ‘TL’ paid tribute to the late Tony Levin and carried all the force of the musician who Tubby Hayes regarded as being ‘his ideal drummer’.

According to an astrology site that I consulted Capricorn is the sign that ‘represents time and responsibility … and its representatives are serious by nature with an inner state of independence’. Whether these characteristics fit Pete Hurt, who was born under the sign, I wouldn’t like to say, but one thing is for sure – he is a writer and tenor saxophonist of rare quality as the intense excitement of ‘Capricorn’ more than demonstrated.

‘Amber’, a dedication to Barry Green’s now two-and-half-year-old daughter, presented the band at its most expressive, with Lowther on flugelhorn and the proud father creating celestial sounds with his elegant touch at the keyboard. Dave Green, rightfully known as the ‘Rolls Royce of bass players’ completed the atmosphere of total sublimity.

Henry Lowther’s droll announcements proved to be a highlight of the evening. None more so than in his explanation of how the next number acquired it intriguing title.  Though Its challenging rhythms seemed familiar, he couldn’t think from where. The penny only dropped when he remembered playing at a Moroccan jazz festival with a group from the Gnawan dynasty of musicians. His new tune bore their influence, hence the title ‘Something Like…’  It brought the first set to an exhilarating close.

The second set opened with the only standard of the evening, ‘Too Young to Go Steady’, a product of the Jimmy McHugh/Harold Adamson writing partnership, recorded by Nat King Cole in 1956 and by John Coltrane on his ‘Ballads’ album of 1962. No matter the note of caution in the title, this fulfilled all the romantic promise of a walk in a park, featuring the gorgeous tenor saxophone of Pete Hurt and an extended bass solo of near-singing perfection from Dave Green.

Much as Henry Lowther clearly loves a challenge, he must have thought ‘You must be having a laugh’ when the organisers of a Finnish jazz festival asked him to compose a piece of music to fit the palindrome ‘Saippuakauppias’ (soap vendor).  To their astonishment, and ours, he met the challenge with complete success, though he did admit that the rigid structure of the piece would relax part way through ‘otherwise it might get boring.’ As if it could.

‘Golovec’ again bore the imprint of Lowther’s wide musical travels with its haunting evocation of the Slovenian forest. ‘White Dwarf’, on the other hand took us into quite different territory, with a remarkable ‘free’ section in which Henry Lowther and Paul Clarvis spurred each other on to ever-more-exciting feats of invention.

The evening closed on a note of reflection with ‘For Pete’, Pete Hurt’s elegiac dedication to the late Pete Saberton, the band’s first pianist.

Along with our thanks to the Progress House Team for their warm hospitality and the excellent quality of sound and lighting, we should also acknowledge the enlightened support of the Arts Council in helping Henry Lowther’s Still Waters take to the road on a nineteen-date tour of the UK. Let’s hope that it provides the impetus for future recordings and continued success.