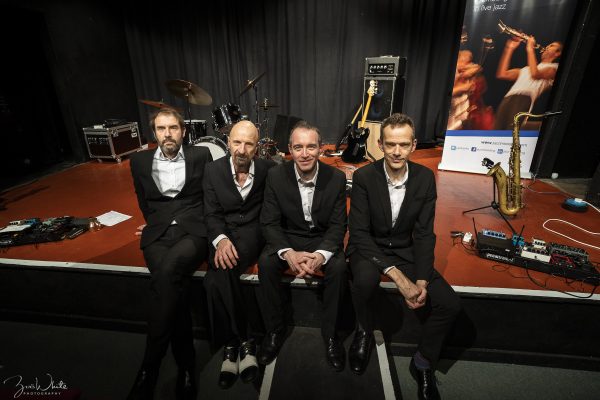 I take my seat in the Progress Theatre. Tonight’s band – Get The Blessing. What to expect? The simple answer is that ‘I don’t know’. The line-up looks interesting and the stage is set for their entry. No keyboard or guitar. The stage is littered with electronic gadgetry and mics are attached to the bells of each of the horns. I’ve been warned that they are loud. The publicity blurb tells me that they’ve been together for twenty years, have a fascination for early Ornette Coleman and a penchant for playing with coloured cellophane bags over their heads. It all seems a far cry from the 12-bar blues, Great American Songbook and jazz classics my ears are usually tuned to, however ‘far-out’ they may reach in the hands of someone like Gilad Atzmon

Such generous applause greets the band’s entry; smartly attired in suits and a little older than I imagined, that I wonder if I’m alone in never having heard them before. Clive Deamer picks up a pair of mallets and sets up an exotic rhythm on his drums. WHAM the band are into their first number. I find myself swept along by its joyful exuberance, the richness of the sound and the depth of the ever-changing textures.  Yes, its loud, but each instrument, perfectly balanced within the ensemble, shines through with the clarity of pure crystal. But, here’s the thing, surely, I can hear more than two front-line instruments?  Messrs. Judge and McMurchie hold the key to the electronic wizardry at their feet and with the merest touch of a button summon whole sections of brass and reeds and the glorious sounds of an ethereal big band. ‘UK’ ends abruptly, a fanfare for the promise of further delights

There’s no let up in pace or the urgency of expression as the band launch into ‘Sunwise’ and five other numbers that form the first set: ‘Equal and Opposite’, ‘Cococloud’, ‘Monkfish’, ‘Hayk’ and ‘Torque’.  It’s a beguiling and kaleidoscopic experience, which for me, reaches a peak of creative splendour with ‘Hayk’, a piece of quite extraordinary power and beauty

‘Cellophant’ introduces the second set. It bursts into a short-lived flower, awakens the senses with its   energy and vibrant colour, and expires suddenly. ‘Not with Standing’, a feature for the breathy, pure-toned tenor saxophone of Jake McMurchie, evolves more gently to an insistent groove laid down by Deamer on drums and bassist Jim Barr. Pete Judge’s trumpet and the electronics provide the mystical background effects. Clive Deamer brings this dream-like piece to a close with a single, perfectly-placed drumbeat

‘Bugs in Amber’, there’s a title to whet the taste buds, spirals into a cyclone of sound. While ‘OCDC’ calls for audience participation with a rapid hand-clapping beat that tests the stamina of all but the faint-hearted, ‘Bristopia’, with a dazzling lead from Pete Judge’s trumpet, sets the feet tapping with the abandon of a mad-cap West Country barn dance. By now the audience are in total thrall to the band; cheers greet the hard-driving punk of ‘The Waiting’, good-humored groans accompany Jim Barr’s pun-ridden introduction to ‘Corniche’. But the party atmosphere doesn’t detract from the quality of the music, which moves towards a stunning close with ‘’If It Can It Will’ and ‘Einstein Action Figure’

A fellow member of the audience broke the eerie silence which filled the Progress auditorium once the band had left the stage with a comment that probably spoke for us all, ‘I soon gave up trying to analyze each number,’ he admitted, ‘I just sat back and immersed myself in the sound’.  What a sound and what an evening

Once again the Progress Theatre proved its versatility as a venue that can accommodate all styles of jazz with equal success and thanks are due to Martin Noble for the excellent sound and lighting, and the Front of House Team for their warm hospitality and for ensuring that everything runs smoothly.