A Portrait of Cannonball 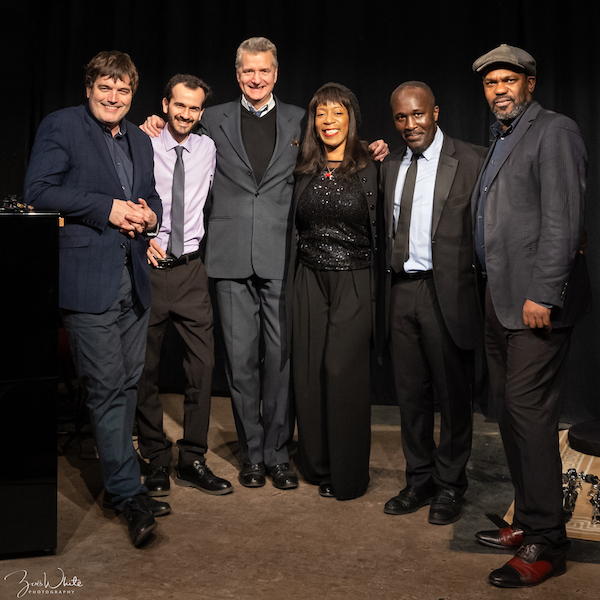 Julian Edwin Adderley was born in Tampa, Florida on 15 September 1928. His voracious appetite earned him the sobriquet ‘Cannibal’. That it later evolved into the much more acceptable ‘Cannonball’ proved an absolute gift for the copywriters who devised his early album titles. What could be better than ‘Cannonball’s Sharpshooters’ for an attention-grabbing banner? ‘Spontaneous Combustion’ perhaps? Cannonball’s debut album for the Savoy label in 1955 announced his arrival on the New York jazz scene as a player of immense vitality and invention. He made people sit up and listen, but above all, to use Tony Kofi’s words from his beautifully poetic introduction to ‘A Portrait of Cannonball’, he made them smile.

It was the warmth of Cannonball’s humanity that endeared him to millions of fans across the world, and which instantly communicated itself with the Progress audience.  Alex Webb lit the fuse to ignite ‘Bohemia After Dark’, and with sparks flying between the rhythm section and the tight front-line of Tony Kofi and Byron Wallen, it was clear that this promised to be an evening to remember.

Like Cannonball, Tony Kofi and Byron Wallen are absolute masters of the blues, as they clearly demonstrated on ‘Thing Are Getting Better’.  A beautifully paced mid-tempo number, firmly anchored by Andy Cleyndert’s rich-toned bass lines and the sensitive pulse of Alfonso Vitale’s drumming, it allowed everyone to relax and really stretch out with their solos

Alex Webb’s excellent narration linked each number within the wider context of Cannonball’s burgeoning career. We soon arrived at 1960 and ‘Del Sasser’, an earthy Sam Jones original from ‘Them Dirty Blues’, Cannonball’s landmark album for Riverside records. If the pots had been simmering up to this moment in the evening, Andy Cleyndert’s magnificent bass solo brought them fully to boiling point!

Rapturous applause greeted the arrival of guest vocalist Deelee Dubé, to evoke Cannonball’s 1961 collaboration with Nancy Wilson, a great singer who sadly died in December 2018. Ms Dubé, the first British recipient of the Sarah Vaughan International Jazz Vocal Award, has a voice of the purest gold. She lit up the stage as she launched into ‘Happy Talk’, with Kofi and Wallen busily ‘chattering’ away in their own musical conversation by way of accompaniment. ‘A Sleepin’ Bee’ by Harold Arlen and Truman Capote, revealed the full depth, range, crystal-clear diction and swing of Ms Dube’s beautiful voice. Absolute magic!

British born Victor Feldman, a brilliantly rounded musician who achieved that rare distinction of ‘making it’ in the States, contributed ‘Azule Serape’ (Blue Shawl) to Cannonball’s ‘At the Lighthouse’ album of 1961. Its open-spaced, Latin-tinged swing provided the perfect launchpad for a dazzling drum solo from Alfonso Vitale and brought an exhilarating first set to a close.

The elegant piano lines of Alex Webb set the second half in motion with Duke Pearson’s ‘Jeanine’, a dreamy, beautifully melodic number, whose precision and logic opened up endless possibilities for improvisation. On the other hand, ‘Sack O’ Woe’, another classic from ‘At the Lighthouse’, and taken a little faster than the original recording, presented the rhythm section at its most soulful and the front-line of Kofi and Wallen at their most exuberant. What fantastically expressive players they are!

Deelee Dubé’s return to the stage not only brought thunderous applause, but truly affirmed her place as a ‘brilliant new voice’ on the UK jazz scene. She negotiated the tricky rhythms of Frank Loesser’s ‘Will I Marry’ with absolute aplomb, captured the tender emotions of ‘The Masquerade is Over’ to perfection, aided by Byron Wallen’s wonderfully expressive obbligato trumpet, both muted and open, and delivered ‘Big City’ as a showstopping belter with the support of the band in full cry.  Great!

‘Walk Tall’, a Joe Zawinul number from the 1967 album ’74 Miles Away’ and also the title of Cannonball’s biography, brought us into the final phase of his career which came to a much-too-early close with his death age 46 on 8 August 1975. It also provided a fitting background to the remarkable achievements, listed by Tony Kofi, which form Cannonball’s enduring legacy – a legacy which extends way beyond music to the heart of African-American identity through his support for Civil Rights and education projects.

After the gentle Latin breeze of ‘Saudade’, Deelee Dubé returned to the stage for the grand finale – what else but ‘Work Song’. If anything defines Cannonball, it’s this number from the pen of cornet-playing-brother Nat – earthy, blues-soaked and overflowing with the power of the human spirit!

To borrow a phrase from another commentator, ‘A Portrait of Cannonball was a blast!’ and in the words of one Progress regular, ‘It was the best gig that I’ve seen at Progress.’ I don’t think anyone could argue with either judgment.

Thanks are due to Hickies Music Store of Friar Street, Reading for the hire of an excellent piano and as ever to the Progress house team for their hospitality and the excellent quality of sound and lighting.