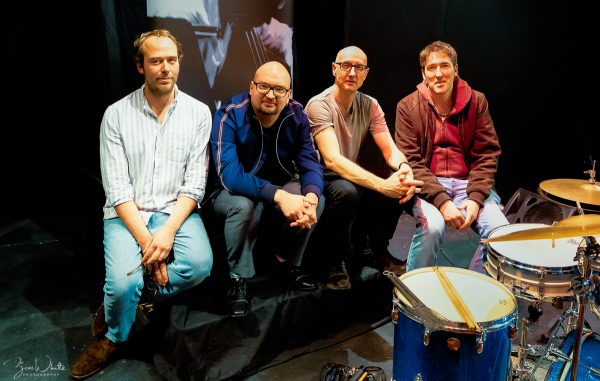 The haunting beauty of a gentle lullaby lingered in the rafters of the Progress Theatre as the audience filed out of the auditorium in near silence at the close of a magical two-hours spent in the company of the Martin Speake Trio and their special guest from New York, Ethan Iverson. The spell remained unbroken for one small child … who said that jazz fails to attract a younger audience? She snuggled into her dad’s shoulder, at peace with her dreams of the evening, as they made their way home.

The music, from the band’s ‘hot-off-the-press’ album ‘Intention’, with all but three titles composed by Martin Speake, had a dreamlike quality. None more so than ‘Hidden Visions’. Thoughtful, reflective, pure in sound, deeply expressive, and evoking a sense of Gaelic mysticism, it held one’s attention absolutely. One could not risk a lapse in concentration for fear of missing any of its subtle delights. Nor did one dare break the creative flow emanating from the stage by applauding at the end of a solo; the audience expressed its appreciation through respectful silence and held its enthusiasm in check until the end of the number and then erupted with rapturous joy.

Imagine a couple locked in each other’s arms. Oblivious to anything or anybody around them, except the gentle strains of ‘Dancing in the Dark’ drifting across the dance floor, their steps are barely perceptible. Perhaps this sensual image of stillness and quiet will give you an idea of the extraordinarily beautiful way in which Martin Speake interpreted this tune. He re-fashioned ‘Young and Foolish’ to heart-wrenching effect later in the programme.

For some unknown reason I found the fun and games of ‘Magic Show’ a little unsettling. Perhaps it was the perceived sense of ‘things not being quite what they seem’. But there again, that’s magic!

But make no mistake, this music could SWING!  Every seat in Row ‘C’ began to rock wildly and seemed destined to break loose from the floor fittings when the band dug into the Charlie Parker 1947 classic ‘Charlie’s Wig’. Nor could one resist the bluesy feel of ‘Bouncing’, the sheer emotional intensity of the untitled number which immediately followed, an incantation to summon the spirits of the earth, or the glorious mix of gospel and calypso influences in ‘Twister’.

The spirit of classic New Orleans jazz was never too far removed from these otherwise very contemporary proceedings. Speake provided a clear and poised lead on alto saxophone around which the other band members could weave their own contributions, either in the form of solos or by adding colour and texture to the ensemble sound; a collective approach, that simply bubbled with invention and rhythmic energy.  James Maddren’s drum feature emphasised these musical roots in ‘Blackwell’, a tribute to the great New Orleans’ drummer Ed Blackwell whose playing with Ornette Coleman helped the advance of ‘free jazz’ in the early 1960s, but never lost the special beat of his native city.

New York based pianist Ethan Iverson, formerly a key player in the innovative band Bad Plus, joined the trio for an eight-date tour only a few days before the Progress gig. His association with Martin Speake dates back some fifteen years, so it was no surprise that he fitted into the group so perfectly.  He plays with sensitivity, an instinct for mood and atmosphere and swings like the clappers using a distinctive lightness of touch and minimum of notes. How could anyone match the moment when Iverson lent over his piano and gently plucked the strings to bring ‘The Heron’ to a close – the perfection of simplicity. Even so, one couldn’t help but feel that like a well-tuned Formula 1 racing car he had vast power in reserve to move up through the gears should the need arise.

Bassist Fred Thomas is similarly blessed with an ear for finding just the right sound at the right moment. One should not under estimate the importance of his self-effacing role within the band, which was especially effective on ‘Young and Foolish’.

Martin Speake is a man of few words on stage. He allows his music to speak for him, and so it should be. The eloquence of his musical voice deserves wider recognition on a world stage. Or is this yet another instance so familiar to British musicians, that the ‘prophet’ is hailed abroad while ignored in his homeland? Nevertheless, it was a privilege to listen to Martin Speake and his trio, with special guest Ethan Iverson, within the intimate environment of the Progress Theatre.

As ever, our thanks to the Progress team for the high quality of sound and lighting, and their warm hospitality.