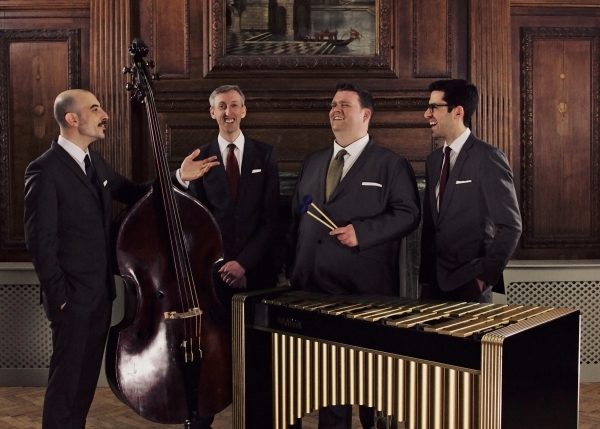 Nat Steele, vibraphonist and co-founder of the Bop Fest Jazz Festival, who grew up in Reading, brings his quartet home to pay homage to the Modern Jazz Quartet (MJQ) one of the most successful and influential groups of the 20th century. Nat will be joined by three of the brightest stars of the UK jazz scene to present ‘Portrait of the MJQ’, featuring  such stellar favourites as ‘Django’, ‘Softly, As In A Morning Sunrise’, ‘Bags Groove’, and a complete performance of the four-movement ‘La Ronde Suite’.

Nat  launched the quartet’s debut album “Portrait of the Modern Jazz Quartet” with a sell-out concert at Ronnie Scott’s, followed by performances  around the UK at venues such as Cadogan Hall, Theatr Clwyd, and the Royal Festival Hall. It received an array of positive reviews in the jazz press, including 4-star reviews in the Observer and Jazzwise magazine and a 5-star choice of ‘Jazz Album of the Month’ in the BBC Music Magazine. Jazz writer Peter Vacher described the album as ‘creative brilliance’.  It even made the top 10 of the jazz charts in Japan.

In 2019, Nat took pride of place in the premier of a new work written specifically with him in mind by Grammy-award winning pianist, arranger and composer Alan Broadbent, to celebrate the 25th anniversary of Watermill Jazz. In 2020 – just before the pandemic – he completed an 18-date Arts Council funded tour of the UK with the MJQ band featuring guest tenor saxophonist Grant Stewart from New York.

Along with saxophonist Alison Neale, Nat founded BopFest as a single weekend jazz festival in 2015. An immediate success with audiences and the press, it attracted both public and Arts Council funding and subsequently grew into a 7-day long extravaganza of bebop and straight ahead jazz in London, featuring some of the best musicians from the UK, Europe and America.

Nat is currently working on two new albums which should come out in 2023.

Pianist Gabriel Latchin is constantly in demand as a side man. Most recently he’s gained attention for his role in performing with Christian McBride and Renee Fleming at Wigmore Hall. He has worked with Ronnie Cuber, former Jazz Messenger Jean Toussaint, Alex Garnett, The London Jazz Orchestra and The Royal Scottish National Orchestra. He has performed at concert halls, clubs and festivals around the UK and Europe.

Double bassist Dario di Lecce was raised in Bari, Italy, where he began studying double bass with Maestro Giorgio Vendola. He’s studied with Lee Konitz, Kurt Rosenwinkel, Kenny Barron, Dado Moroni, Eddie Gomez and Buster Williams. He has performed in Italy, UK, Netherlands, France, Slovenia and the United States, and is now based in London where he is currently working with some of the most important musicians on the British jazz scene.

Multi award-winning drummer Steve Brown moved from his home town of Manchester to London in 1996. He quickly made his ‘swinging’ mark in support of visiting jazz giants Harry ‘Sweets’ Edison and Conte Candoli and soon became first-call sideman with many of the capital’s finest musicians.  He’s a member of Scott Hamilton’s quartet and appears on Concorde and other major labels. Between engagements with Scott Hamilton, Steve has performed and recorded with a wide variety of artists including Benny Golson, Benny Green, Barry Harris, Junior Mance, Charles McPherson, John Bunch and Hod O’Brien.

Examples of what to expect:   Bluesology   Autumn in New York

‘Portrait of the MJQ’ is available here