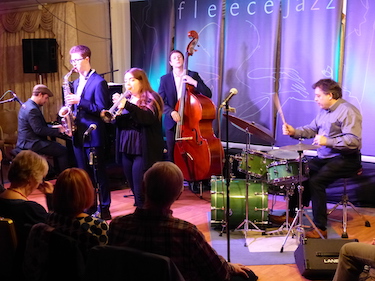 Clark Tracey is an excellent, highly experienced, award-winning drummer, bandleader, composer and arranger. He grew up in a jazz environment as the son of the late Stan Tracey and from an early age took to the piano and vibraphones. At 13 he started playing the drums and he turned professional at 17 in 1978 by joining his father’s various ensembles.

Clark has had 40 years’ experience playing alongside some of the most important artists in jazz at home and abroad. British artists include names such as Ronnie Scott, John Surman, Alan Skidmore, Kenny Wheeler, Alan Barnes, Don Weller and Tommy Smith. He has recorded over 100 albums (15 as a leader) and performed in over 50 countries. He has been awarded “Best Drums” title six times in the British Jazz Awards (most recently in 2018) and Ronnie Scott’s Award for “Best Drums” in 2007.

Clark has also had a long history of finding young talented musicians and presenting them in a professional environment. This latest group formed at the beginning of 2018 is no exception and has even been tipped as his best line up for several years. All exceptional musicians, three of whom have been finalists in the BBC Young Musician of the Year competitions. Their debut CD, No Doubt, was well received and showcases the best of young jazz in the UK. On trumpet we have either Alexandra Ridout or James Copus, on sax Sean Payne, on piano Elliot Samsom, and on bass James Owston. The driving force behind the night’s entertainment however will, of course, be Clark Tracey himself bringing a rhythmic diversity, taste and sensitivity that has made him one of the most respected musicians.