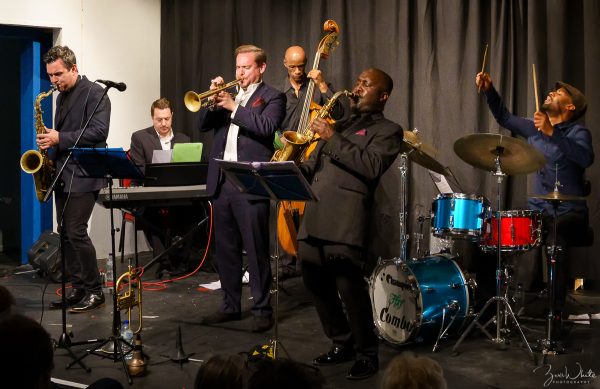 There’s something special about the shoe-box shape of Reading’s Progress Theatre and the intimacy of its stage to the steeply ranked 96-seats of the auditorium that casts its own magical spell and makes it a marvellous venue for jazz.  There’s no need for amplification, except for announcements, as each instrument finds its own balance and is perfectly audible within the natural acoustic. The audience can listen in comfort and there are no tinkling glasses or irritating conversations to distract the musicians. In short, the Progress has inspired many great performances throughout its seven-year association with Jazz in Reading, none more so than the breath-taking and utterly compelling visit by the Quentin Collins Sextet on Friday 18 October as part of its national ‘Road Warrior’ tour.

To describe Quentin Collins as a virtuoso is almost a disservice, but I can’ think of another superlative to adequately describe his astonishing technical skill, musicianship and feel for the music. He is the complete trumpet player with a gorgeously burnished tone and an incredible range. He plays with unbelievable accuracy, expresses himself with a true sense of narrative, drawing on a seemingly infinite fund of ideas and can conjure the widest spectrum of sounds imaginable from his instrument without ever having to resort to a mute; a resonant growl at one end of the scale to an almost imperceptible wisp of sound at the other.  And as if that wasn’t enough, like a latter-day Art Blakey, he leads his band with such strength and bravura, that his fellow musicians can’t fail to rise to the challenges of the music.

Add to the mix, writing of superb quality – more or less equally shared between Collins himself and his close compatriot Tom Harrison, plus a measure of blues from the great Oliver Nelson and a couple of standards; stir-in the tightest arrangements you’re likely to hear anywhere, honed to perfection on the early legs of the band’s tour and you arrive at a formula that burst into life on ‘Road Warrior’, the title track from Collins’ recently issued 5-star rated album. If the opening number impressed with its scorching solos and explosive ensemble sound, the tortuous ‘Float Flitter Flutter’, a dedication to the late Sonny Fortune, took the breath away with its knife-edge precision. ‘How do they know when to come in?’ asked one member of the audience in wide-eyed amazement during the interval. I guess the only simple answer is to say, ‘That’s the marvel of jazz at its very best!’

The mellow tones of Collins’ flugelhorn over drummer Shane Forbes’ tom-toms and cymbals opened ‘Jasmine Breeze’, its gentle mood sustained by the perfect support of Steve Hamilton on keyboard and Larry Bartley on bass and the haunting solos of Brandon Allen on tenor and Tony Kofi’s alto.

The joyful ‘Look Ahead (What Do You See?)’ took its inspiration from father-and-son conversations in the Collins’ household, and brilliantly evoked a vision of the infinite possibilities that might lay ahead for a ten-year-old boy, with perhaps just a touch of caution on the part of the father, and an ‘Oh, dad’ shrug of the shoulders from the son.

The 12-bar bebop blues ‘Butch and Butch’, from Oliver Nelson’s classic 1961 album ‘Blues and the Abstract Truth’, closed the first set in storming fashion; a pattern of full-blooded riffs building the tension and driving along a string of free-flowing and perfectly executed solos, rounded off by a tour-de-force outing for Shane Forbes on drums.  If Steve Hamilton succeeded in reducing the temperature at times, it was never at the expense of excitement. All this, I should add, was underpinned by the rich tones and immaculate bass of Larry Bartley.

The angular ‘Do You Know the Way?’, featuring the soaring alto saxophone of Tony Kofi, got the second set under way, while ‘The Hill’, Tom Harrison’s emotionally charged tribute to the abiding influence of the great saxophonist, composer and educator Jean Toussaint,  also served to trace a musical line of descent via Jean from the incomparable Art Blakey – whose ‘message’ is still a potent force today!

Despite its menacing undertones Art would have loved ‘El Farolito’, a high-octane impression of a fight that Tom Harrison had the misfortune to witness on a visit to San Francisco – scorching solos from Brandon Allen and Tony Kofi, while Collins’ provided the automatic gun-fire. A melee of sounds brought the piece to what we hope was a peaceful conclusion.

In complete contrast ‘Wide Horizons’ explored reflective territory with Collins on flugelhorn to a gorgeous background of choral effects which drew to a beautiful ending with the repetition of a sub-theme over Shane Forbes’s drums.

In an evening of surprises there was none greater than the inclusion of ‘Oh, Look at Me Now’, written by pianist Joe Bushkin in 1941 and a huge hit for the Tommy Dorsey Orchestra with a certain Mr. Frank Sinatra on vocal duties. This polished and swinging, medium-tempo arrangement expressed all the feeling of the original and featured the poised and lyrical playing of Tony Kofi on alto and the ‘booting’ tenor of Brandon Allen, as well as brass fireworks from the leader. Shane Forbes’ perfectly timed cymbal chime brought the piece to a close.

Like ‘Oh, Look at Me Now’, Victor Young’s ‘Stella by Starlight’ began life in the 1940s as the main theme for the now long-forgotten movie ‘The Uninvited’. The song, on the other hand, which has always seemed to me perilously difficult to successfully negotiate, has lived on as a favourite for jazz players across the years. In that respect Quentin Collins paid tribute to such legends as Harry James, Charlie Parker, Dizzy Gillespie and Miles Davis amongst many others, to bring an exhilarating evening of music to a fitting close amid the rapturous applause of the near sell-out audience.

As ever, thanks to the Progress ‘House Team’ for their warm hospitality and attention to detail, which all helped to make the music ‘really happen’!