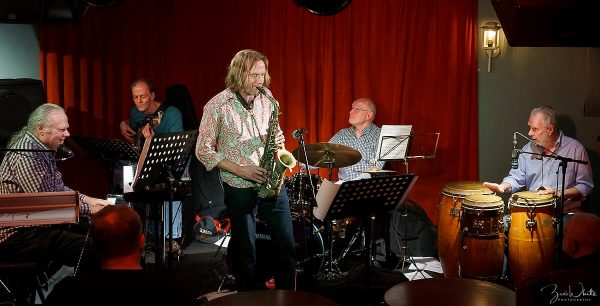 Legendary latin-jazz-funk fusion outfit Paz, formed in 1971, has recorded eleven critically acclaimed albums, often topping the fusion charts. The band is led by keyboard player Geoff Castle, for many years a stalwart of the pioneering jazz/rock band Nucleus. Geoff has played and recorded with the likes of George Coleman, Ian Dury and Georgie Fame.

This is a band which has remained steadfastly resistant to being pigeonholed, incorporating a multitude of influences well before ‘fusion’ became fashionable; Paz’s music stands the test of time magnificently.

“The UK’s premier latin-fusion band, Paz play a lightly grooving, cheery and danceable music with loads of funk and flair” Time Out

Get a flavour of what’s in store here: